New Zealand will look to get another one across India after a stunning victory in the fourth-ODI.

Just when you thought India was developing a habit of winning, they succumbed in the most unpredictable manner. That said, the optimists in the Indian camp will look to take some positives from the mammoth loss. New Zealand exploited the condition on offer and the absence of big guns such as Kohli and Dhoni. With the stalwarts missing, once the hosts exposed the middle-order jugular, there simply was no turning back.

The loss is surely a wake-up call for the Indian team. It’s a stern message to the rest of the players to build capabilities that match those possessed by Kohli and Dhoni.

Here’s a look at some of the scores at this venue:

The home team struck gold in the previous match and is expected to stick to the same winning combination. With the World Cup around the corner, New Zealand would look to wrap Trent Boult in cotton and ensure that he’s in peak condition for the big event. Therefore, after Boult’s stellar show in the 4th ODI, they might just hand him a breather and pay Tim Southee.

Martin Guptill has been a disappointment in this series. He’s just unable to convert his starts and build an innings. It remains to be seen if New Zealand will give him one last opportunity.

Henry Nicholls put up a decent show with the bat at Hamilton and the hosts will continue to play him up the order for greater solidity at the top.

The burden of the big guns now falls on the other players. And this is the right time for them to show that they can still take the team to the finish. That would be a good goal for the rest of the players to work on. It is this plan that would make India a good contender for the World Cup.

The key players would still be Rohit Sharma, Hardik Pandya and Kuldeep Yadav. The spinners would need to bring the breakthrough early in the game for the scales to tip in their favour.

Expect Bhuvneshwar Kumar to be rested. This would mean that Mohammed Shami could walk back in to the eleven. Also the tourists could unleash the pace of Mohammed Siraj in place of Khaleel.

Ross Taylor: in keeping with the batsman’s good form, the becomes a strong choice of a batsman for you

Tom Latham: While MS Dhoni is expected to make a comeback, there is still uncertainty and therefore, Tom Latham could be a good choice of wicket-keeper in your Fantain Fantasy XI

Colin de Grandhomme: the New Zealand all-rounder is a good choice for an all-rounder in keeping with his good showing in the series so far

Hardik Pandya: the flamboyant Indian all-rounder made a stunning came back but did little worthy of notice in the previous ODI. That said, he’s always that “X-factor” that you look for when putting a Fantain Fantasy XI together. 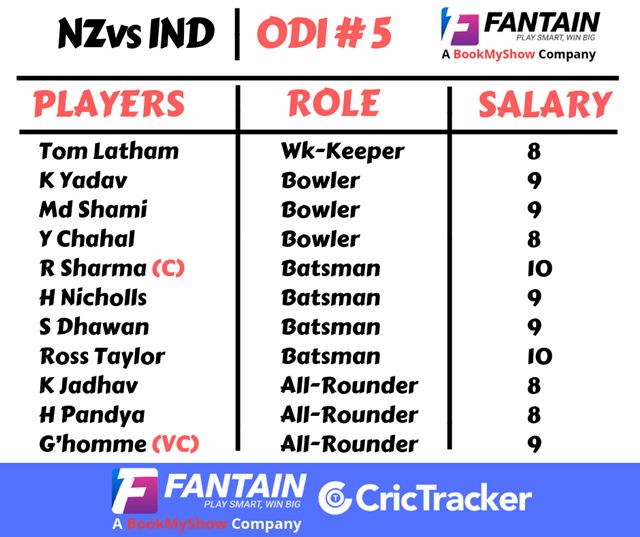 Here is the video guide of the match: