Tim Seifert is set to make his debut.

After managing to draw the first Test in Wellington, Sri Lanka slumped to a humungous 423-run defeat against New Zealand in Christchurch to lose the series 0-1 which also meant that the Islanders didn’t have a happy ending to 2018. However, it’s New Year and the Lankans, led by fast bowler Lasith Malinga, would be hoping to turn their fortunes around in the ODI series, set to get underway tomorrow.

The first encounter at Bay Oval in Mount Maunganui is a Day-Night fixture. The Kiwis, captained by Kane Williamson, would want to maintain their dominance over their opponents. In their previous ODI series’ even as the Kiwis gave a tough fight to Pakistan in the UAE, Sri Lanka went through a torrid time in their home series against Eoin Morgan’s England where they could turn victorious in only one encounter.

The ground first hosted an international match way back in 2014 but has only been a witness to five matches being played. The Black Caps would be playing their fifth match and their second against the Lankans at this venue since January 5, 2016. Only two matches out of five have been won by the team batting first and teams may opt to chase after winning the toss.

Colin Munro and Martin Guptill, who made a comeback, are the opening batsmen with skipper Williamson at number three. The experienced Ross Taylor is slotted to bat at four. Tim Seifert is set to make his debut as Tom Latham has been rested. James Neesham may also get a go. Matt Henry, Tim Southee and Trent Boult are the specialist pacers with Ish Sodhi as the spin-bowling option.

The left-handed combo of Niroshan Dickwella and Kusal Perera form the opening stand. The experienced Dinesh Chandimal bats at number three with Kusal Mendis to follow. Any one of Gunathilaka and Gunaratne will play. Dasun Shanaka, Thisara Perera and Seekkuge Prasanna are the all-rounders with Malinga and Lahiru Kumara being the genuine fast bowlers in the lineup.

The prediction is for New Zealand to win the first match of the series. 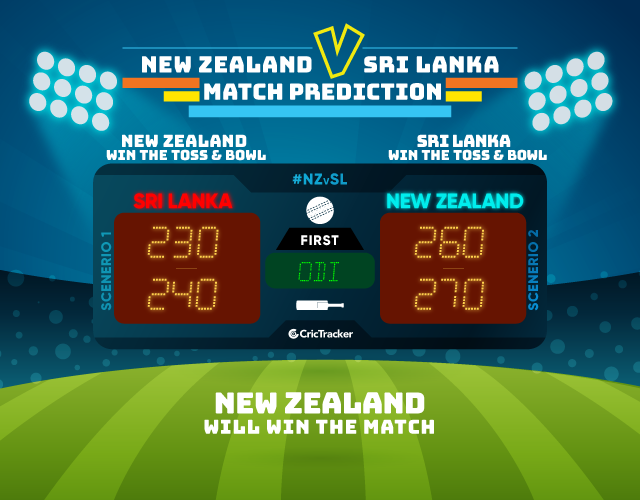