New Zealand is expected to win the final ODI and complete a whitewash over Sri Lanka.

New Zealand clinched the 3-match ODI series against Sri Lanka with back to back wins in high-scoring matches at the Bay Oval prior to the final ODI in Nelson. Sri Lanka registered their two biggest totals in the ODI format over the Kiwis but both of them ended with no joy. In the first ODI, batsmen from both the sides contributed to a record aggregate of 697 runs. The second game was all about Thisara Perera who bounced back with the bat after conceding quite a lot of sixes with the ball.

The all-rounder smashed a record 13 sixes on his way through to his maiden International century of 140. However, his knock couldn’t complete the script one of the greatest comebacks in the history of ODI cricket. New Zealand might prefer to rotate their players with Trent Boult and Matt Henry making way for Doug Bracewell and Lockie Ferguson. The hosts brought Tim Southee in the second ODI in place of Ferguson who did well in the first match.

The 3rd match of the three-match ODI series between New Zealand and Sri Lanka will be hosted by the Saxton Oval in Nelson.

The Nelson’s Saxton Oval might not be same in producing big totals like the first two matches of this ODI series. In the previous three ODI games at this venue, the average first innings total has been 244. In the nine completed ODI matches at this venue, the chasing sides won on seven occasions and lost another two by big margins.

Since the start of 2018, Thisara Perera has been impressive in the ODI format with both bat and ball. The Lankan all-rounder scored 559 runs with two fifties and his maiden International ton. He also picked up 25 wickets with three 4-fers in the 18 ODIs in this span. He is a must pick from Sri Lanka as he is expected to make a valuable contribution either with bat or ball.

The all-rounders Jimmy Neesham and Thisara Perera will be crucial for their respective sides and are to be considered for multiplier options. Ross Taylor has five consecutive fifties in ODI cricket as is expected to make it six in a row. New Zealand’s top three batsmen and Ish Sodhi can be considered for vice-captain roles. 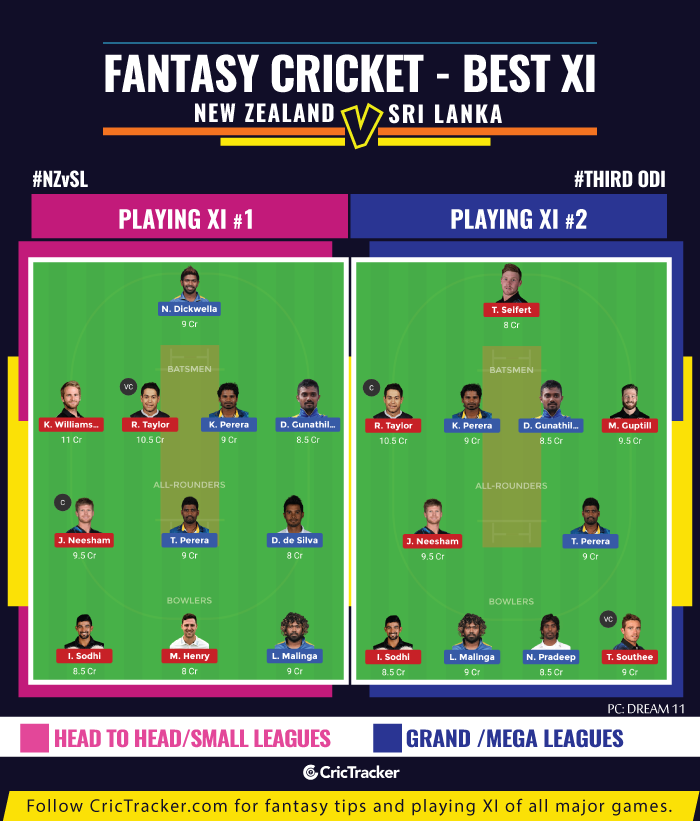 New Zealand is expected to win the final ODI and complete a whitewash over Sri Lanka.