Jimmy Neesham making his first international appearance since June 2017 made it count with a thunderous knock.

New Zealand all-rounder James Neesham had made his last international appearance in June 2017, in a Champions Trophy match against Bangladesh. He continued playing domestic cricket and also featured in New Zealand’s domestic T20 League, Super Smash. Moreover, he remained perennially active on Twitter and became famous for his regular jokes and banters on the social media platform.

But Neesham never really made it to the international side in a long time, until today. The first ODI of the year 2019 brought a pocket full of surprises. Jimmy Neesham went berserk at the Bay Oval, Mount Maunganui today and hit five sixes in one over, from Sri Lankan seamer Thisara Perera.

He walked out to bat when New Zealand were in a pretty formidable position at 5 down for 316. It was the end of the 47th over when Henry Nicholls returned to the pavilion. With only three overs remaining from there, a maximum total of 350 was predicted for the Kiwis. But new at the crease, Neesham had some other plans.

Soon wicketkeeper and debutant Tim Seifert was dismissed in the 48th over but that didn’t hamper Neesham’s charge. In fact, in the 49th over, he hit each of the first five legitimate deliveries for a six. Perera bowled a no-ball in between off which Neesham took a couple of runs. Before the last delivery of the over, it seemed possible that Neesham could break Herschelle Gibbs’ record for most runs in an over in ODIs.

Gibbs had hit six sixes in an over during the 2007 World Cup, against the Netherlands. Thisara himself has the best of 35 runs in an over and is second in the list. Neesham eventually scored a single off the last ball and joined AB de Villiers record of the joint 3rd highest runs in an over – 34 runs.

Although the all-rounder couldn’t complete six sixes in an over he helped New Zealand post a total of 371 for 7. His 13-ball 47 has put him right up on top in the list of highest strike rates in an ODI innings. His strike rate of 361.53 is the best in ODIs and the second highest in International cricket.

The previous highest strike rate record in an ODI innings was held by AB de Villiers – 338.63 and highest overall in International cricket is 362.50 (T20I) which is on the name of Yuvraj Singh. These records are bound to a threshold of minimum 10 balls faced in an innings. 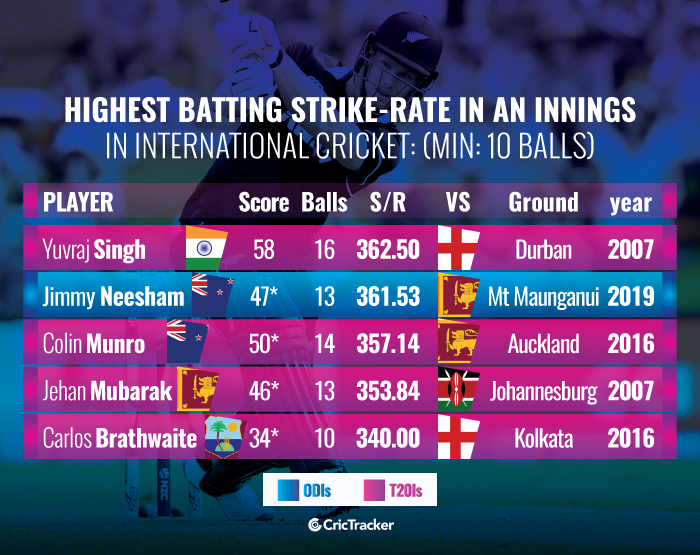