New Zealand is expected to win this one-off T20I but Sri Lanka can come up with a surprise.

After the ODI series whitewash, New Zealand will face Sri Lanka in the One-off T20I game at the Eden Park on Friday under the captaincy of Tim Southee. The Kiwis have been a struggling side in the T20I format since the series loss to Pakistan at home. They have won only one of their previous 10 T20 International matches. Jimmy Neesham, who was New Zealand’s X-factor during the ODI series has been ruled out of this T20I fixture due to injury.

Sri Lanka are not any good in this format having lost their four of their last five T20I matches. Led by Lasith Malinga, the Lankan team has some attractive batsmen suited for T20I cricket. They will be hoping to end the tour on a high by registering their first win of 2018. This game is crucial for New Zealand as they lost each of their last six T20Is. Another defeat will just extend their losing streak and make things worse.

The One-off T20I match between New Zealand and Sri Lanka will be hosted by the Eden Park in Auckland.

The Eden Park hosted three T20Is in 2018 – Pakistan scored 201/4 and won by 48 runs, Australia chased down a record 244-run total and New Zealand got just 150/9 to lose the game. The results more or less confirm it is going to be a high-scoring contest between New Zealand and Sri Lanka. The side with a good bowling attack can be sure of a win even while defending any score here.

Colin Munro’s T20I record makes him a clear cut for the captain’s role alongside his opening partner Martin Guptill. The likes of Kusal Mendis and Thisara Perera can also be considered for the same given their recent record. Kusal Perera and Ish Sodhi can be selected as vice-captain. 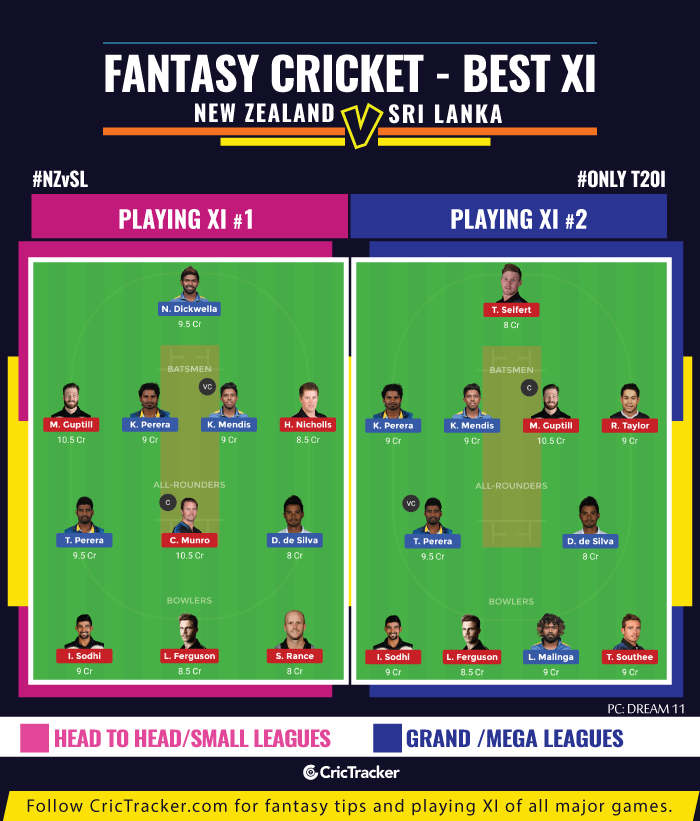 At least two players with 8 credits need to be picked to be able to fit in both Colin Munro and Martin Guptill. This is because the New Zealand opener costs 10.5 credits while the likes of Dickwella and Thisara are at 9.5 leaving 60 credits for seven players.

New Zealand is expected to win this one-off T20I but Sri Lanka can come up with a surprise.