Seven out of the nine matches were won by the team batting second.

Thisara Perera gave New Zealand an almighty scare when he almost guided Sri Lanka to an unfathomable victory in the second ODI at the Bay Oval in Mount Maunganui. However, he couldn’t take his team over the line and subsequently, the hosts lost the match and also the series. The team, captained by Lasith Malinga, is now scheduled to play the third encounter at the Saxton Oval in Nelson.

The match is a dead rubber and both teams would be looking to make some changes in order to test the bench strength ahead of the World Cup. The Black Caps would be pretty satisfied with their batting, but their bowling has looked rattled when put under the pump. The Lankans, on the contrary, would be low on confidence and would be keen to go into the only T20I on January 11 with a victory under their belt.

The venue has been a witness to nine completed encounters with one match between the Kiwis and the Lankans producing no result. Out of those matches, only two of them were won batting first. Hence, it won’t spring a surprise if the teams opt to field first after winning the toss. Also, the track has a history of dishing out some high-scoring fixtures and another one may be in the offing for tomorrow.

The home team may give Doug Bracewell an opportunity in place of Trent Boult, who played the last two games. Guptill and Munro are the opening batsmen with captain Williamson and the experienced Taylor at number three and four respectively. Neesham would be looking for another decent show. Bracewell would partner Southee and Henry in the fast bowling department with Sodhi as the spinner.

The Lankans may bring in Dhananjaya de Silva in place of either Dinesh Chandimal and Asela Gunaratne respectively. Dickwella and Gunathilaka are the openers with the Kusals to follow. Chandimal may not get a chance to make amends for a couple of indifferent shows. A lot would again depend on Thisara Perera. It would be interesting to see how Malinga motivates his team after the drubbings.

The prediction is for New Zealand to win the match to whitewash the Islanders. 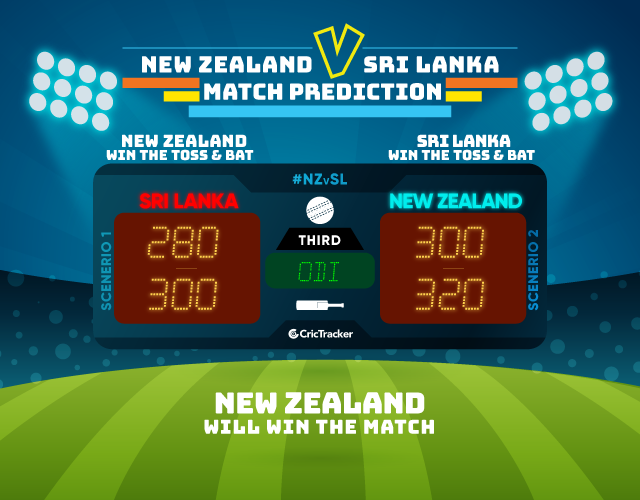