New Zealand vs Sri Lanka: Only T20I, Match Prediction- Who will win the match?

New Zealand vs Sri Lanka: Only T20I, Match Prediction- Who will win the match?

The short boundaries at the venue aren't expected to make things easy for the bowlers.

Sri Lanka’s campaign in New Zealand, well and truly, went from bad to worse after they were clean swept in the three-match ODI series following the 1-0 drubbing in the Test series. The 50-overs matches in Mount Maunganui and Nelson respectively turned out to be high-scoring affairs. Even as the visiting team did exceptionally with the bat in hand, their bowlers couldn’t quite provide appropriate support.

Nonetheless, Lasith Malinga and Co would have a chance of making amends in the only T20I that is scheduled to be played tomorrow in Auckland. The Kiwis, on the other hand, have got the better of their opponents, albeit they have had to strain a wee bit. Before facing India in the ODI and T20I series, the Black Caps, captained by the enigmatic Kane Williamson, would be hoping to win the encounter.

The pitch at the Eden Park has been a witness to 16 matches out of which eight were won by the team, batting second while two games were tied. Hence, it won’t spring a surprise if the teams opt to field first after winning the toss. Also, the boundaries at the stadium aren’t the biggest by any stretch of the imagination and a run-churning spree could be in store. Bowlers are expected to come under the pump.

Martin Guptill and Colin Munro form the left-right the opening batsmen with Glenn Philips to follow. A lot would depend on Ross Taylor, who would bat the number four. With Tim Southee slotted to bat at nine, there’s enough depth in batting. Lockie Ferguson and Southee are the fast bowlers with Santner and Sodhi as the spinners in the lineup. 28-year-old Doug Bracewell is the genuine all-rounder.

Niroshan Dickwella and Kusal Mendis are likely to open the batting with Kusal Perera to bat at number three. Only one of Dinesh Chandimal and all-rounder Dhananjaya de Silva would play. The focus would again be on Thisara Perera to deliver with both bat and ball. Skipper Lasith Malinga and Kasun Rajitha would play. A toss-up may happen between Lahiru Kumara and Nuwan Pradeep, the two pacers. 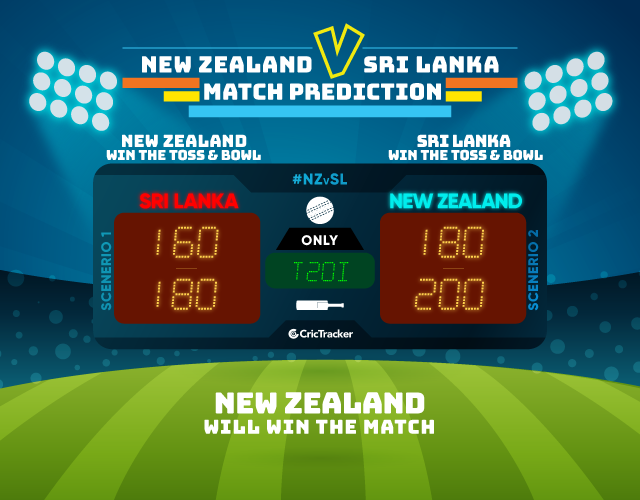