Suzie Bates will be the player to watch out for as she has been exceptional in this format, on her day she can destroy any bowling lineup.

After winning 3 matches in the One-Day International series by the India Women’s team convincingly, Its time for the shortest format of the game. This is one of the biggest defeats for the host in the past one year, so they will want to win this T20I series and level things on the tour.

From India’s point of view Smriti Mandhana has been the star player of the tournament, now she is also No.1 ODI player in the world. Along with her Jemimah, Mithali provides equal contribution with the bat when required. From the bowling point of view spin trio Poonam, Deepti, and Ekta have been phenomenal, more often than not they are able to provide breakthrough when required.

Meanwhile New Zealand will be more comfortable in this format as they have the best T20I player in the world, though Suzie bates did not have best of the series but half-century in the last match must boost her confidence, along with her Sophie Devine is a crucial part of this T20I squad so, both need to step up in order to set the tone for rest of the series.

The three T20Is will be played in Wellington, Auckland and Hamilton on 6, 8 and 10 February.

This pitch will offer enough for both the batsmen and bowlers; wind could be a factor in this stadium. The average score on this pitch is around 145. 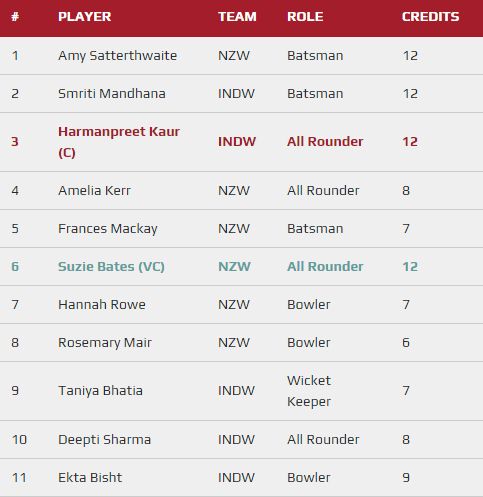 Suzie Bates will be the player to watch out for as she has been exceptional in this format, on her day she can destroy any bowling lineup.