Who will open the innings for India alongside Smriti Mandhana?

New Zealand Women would be looking to bounce back strongly against the India Women in the 3-match T20I series having lost the ODI series 2-1. The hosts won the final game of the ODI series after losing in the first two. The White Ferns aren’t having a great time recently as they were knocked out from the Women’s WT20 in the group stage following their first defeat to India in the competition. After clinching the ODI series, India will look to continue their recent form in the T20I cricket.

The Indian Women’s team hogged the limelight for their aggressive tactics during the WWT20 where they dropped their ODI skipper Mithali Raj. It will be interesting to see whether they will continue the same in this series. The talking point in the New Zealand squad will be the return of the all-rounder Frances Mackay. She has been awarded a call-up for the first time since the WWT20 in 2014. The 28-year-old put on impressive performances with both bat and ball in the recent Women’s Super Smash T20.

The first game of the 3-match T20I series between New Zealand Women and India Women will be hosted by the Westpac Stadium in Wellington.

The Westpac Stadium hasn’t hosted any Women’s match in the recent past. It will be tough to judge how the wicket will play. However, considering how the track behaved during the ODI game on Sunday, the Women’s T20I could be played on a tricky track unless special changes are made keeping the Men’s game to be followed in mind.

Note: India might pick Radha Yadav ahead of Ekta Bisht as they did during the Women’s WT20.

Frances Mackay made a comeback to the New Zealand team after a gap of nearly five years. The recently concluded Women’s Super-Smash played a key role in her comeback. MacKay was the leading run-getter in the competition with 367 runs from nine innings at an average of 73.4 with three fifties. She also bagged nine wickets at an average of 19.55 in this tournament. 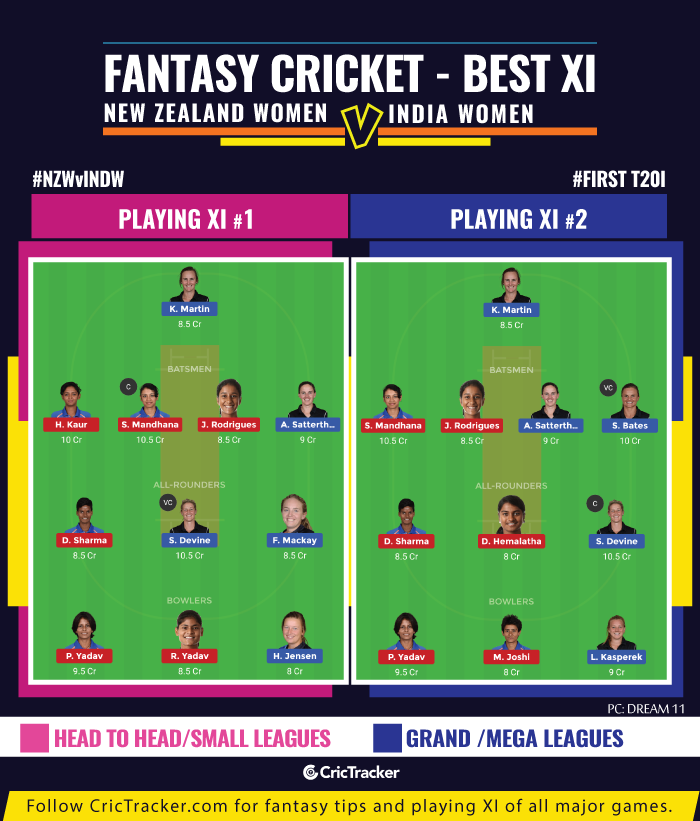 The question once again revolves around Mithali Raj’s batting position. India might continue with Rodrigues and Mandhana at the top considering the ODI series performances. India might not change their approach in the format but could adjust Mithali in the middle-order for the crisis times which they didn’t do in the WWT20 semi-final against England.

New Zealand Women are expected to take the lead in the T20I series if they manage to withstand the fight by the Indian team.