What are the chances of Smriti Mandhana scoring her second consecutive century?

India Women started their tour of New Zealand with a huge win when they defeated the hosts by a 9-wicket margin in the first ODI in Napier. The ongoing 3-match ODI series between the two sides is part of the ICC Women’s ODI championship. India claimed crucial points and aim a direct qualification for the World Cup in 2021 as they were made to play the Qualifier in 2017. Once again their spinners are expected to play a key role this time at the Bay Oval in the 2nd ODI.

Leg-spinner Poonam Yadav’s 3-wicket haul troubled the New Zealand’s top order while left-arm spinner Ekta Bisht ran through the lower-order with three wickets. India’s opening pair of Smriti Mandhana and Jemimah Rodrigues nearly chased down the target on their own. Mandhana fell after scoring a century when India were three runs away from a victory. She will be hoping to finish the formalities this time around.

The second game of the 3-match ODI series between New Zealand Women and India Women will be hosted by the Bay Oval in Mount Maunganui.

The Bay Oval has been a high-scoring one in the Women’s cricket as well. The last two Women’s ODIs played here witnessed totals of 253 and 270 been chased down. The ball is expected to turn more than during the first ODI as this game will be played on a track used for the Men’s ODI twice in the space of three days. However, this might not bring down the chances of a high-scorer if the pitch is watered to make it look fresh.

Note: New Zealand might bring in Katie Perkins at the cost of one of the two pacers after a poor batting performance in the first ODI.

Note: India might pick Meshram ahead of Hemalatha depending on the flatness of the track. They are expected to consider Mansi Joshi ahead of Shikha Pandey or Jhulan Goswami who were pretty ordinary during the first ODI.

During the last ODI, Deepti Sharma completed 50 wickets in ODI cricket. She completed the double of 50 wickets and 1000 runs in this format in only 43 games. Thus, Deepti became the quickest to this all-round double among Indian players surpassing Kapil Dev (46 matches). She will be batting at No.3 ahead of Mithali Raj. This will increase the chances of her being the MVP more often.

Smriti Mandhana will obviously be the first choice for either as captain or vice-captain. She has seven fifties and two centuries in 13 ODI innings since the start of 2019. Jemimah Rodrigues will be a worthy multiplier pick given her recent performances. Poonam Yadav and Deepti Sharma are perfect as captain and vice-captain among all-rounders and bowlers. The senior players Sophie Devine, Suzie Bates, Mithali Raj, Amy Sattherwaite and Harmanpreet Kaur might be overshadowed more often by the youngsters. 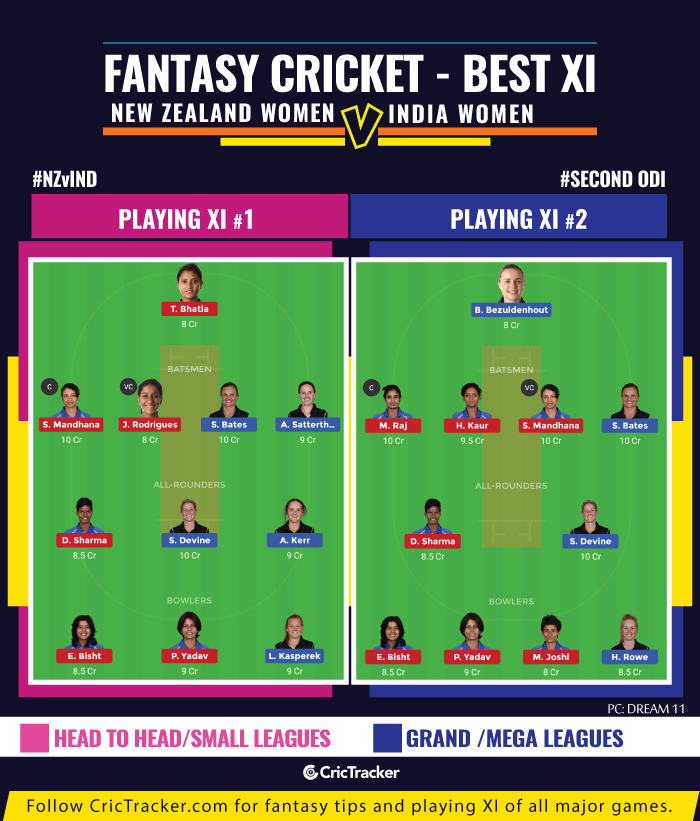 With India, more likely to have a top three of Mandhana, Rodrigues and Deepti, the likes of Mithali and Harmanpreet might not get much to bat unless they depart early on or they bat first. Harmanpreet might bowl a bit depending on the pitch while Mithali won’t have a role to play in terms of fantasy game if she doesn’t get a chance to bat.

India Women are expected to get better of the hosts once again and clinch the ODI series with one game to spare.