Mohammad Rizwan almost took his side home with an unbeaten 99 against Central Punjab. He has amassed 288 runs at an average of 41.14 in 9 matches.

The 29th match of the National T20 Cup 2020 will be played between Northern and Khyber Pakhtunkhwa at the Rawalpindi Cricket Stadium, Rawalpindi.

The match is scheduled to start at 03:00 PM Local Time (03:30 PM IST) and will be streamed on Pakistan Cricket YouTube Channel.

It’s the clash between the top-two teams in the tournament, Northern and Khyber Pakhtunkhwa. This being the last league game for both the teams, they would want to finish on a high and carry the momentum forward.

The table toppers, Northern have won 7 games out of 9 and are comfortably through to the knock-outs. They are coming off an impressive 39-run win victory over Balochistan. Khyber Pakhtunkhwa are coming into this game having lost their last two games. They will be eager for a win here before playing their semi-final clash against either Sindh or Central Punjab.

NOR vs KHP Weather Report for Match 29:

It will be a sunny day in Rawalpindi with humidity levels at 34 per cent. The temperature will be around 33 degrees Celsius.

The surface at Rawalpindi Cricket Stadium has been very good for batting. The ball comes on to the bat nicely and we have seen some high scoring matches recently.

NOR vs KHP Top Picks for Today’s Dream11 Match:

Mohammad Rizwan almost took his side home with an unbeaten 99 against Central Punjab. He has amassed 288 runs at an average of 41.14 in 9 matches.

Fakhar Zaman is in good form and has amassed 285 runs in the tournament at a strike rate of 32.

Haider Ali has looked pretty impressive in the tournament. He has mustered 269 runs at a strike rate of 174.67 in just 6 innings.

Suggested Playing XI No.1 for NOR vs KHP Dream11 Fantasy Cricket: 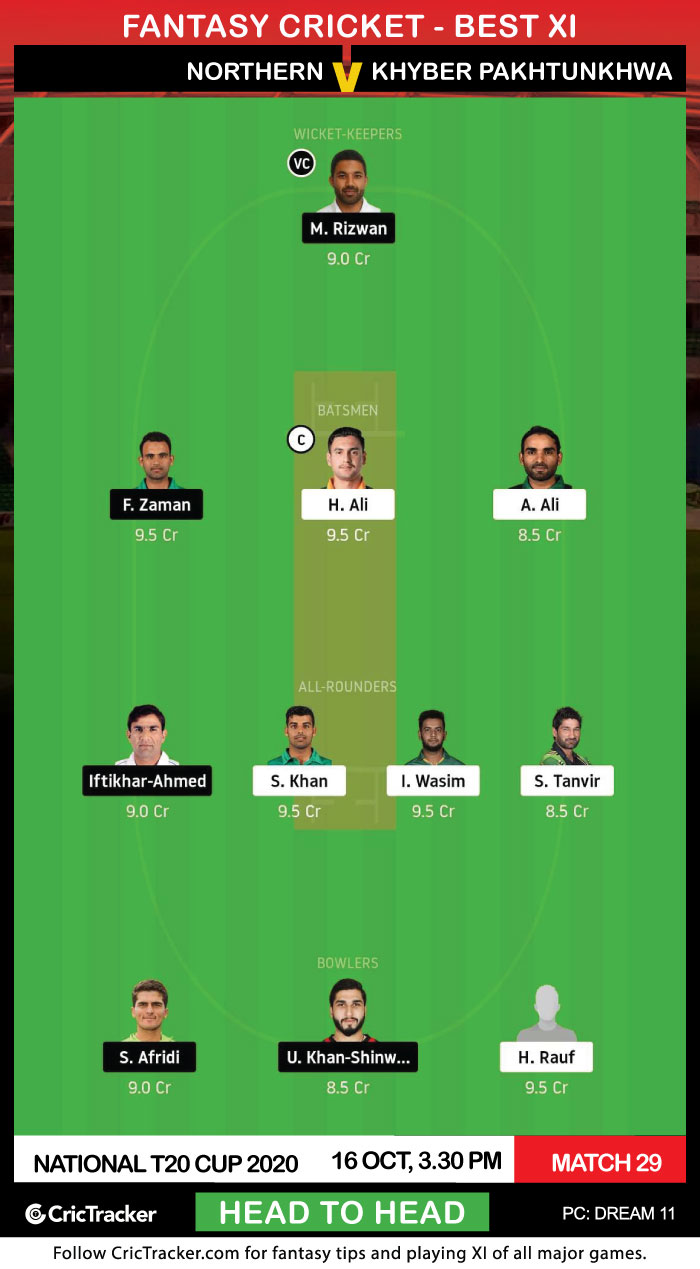 Suggested Playing XI No.2 for NOR vs KHP Dream11 Fantasy Cricket: If Zeeshan Malik gets a game, he will be a good addition to your Grand League team.

NOR vs KHP Today’s Probable Winners: