England scored 241 in Napier back in November 2019 during their T20I against the Kiwis.

The fate of New Zealand’s T20I series against Pakistan has already been decided as the hosts have taken an unassailable 2-0 lead. In the second game, Mohammad Hafeez’s unbeaten 99 couldn’t help the Men in Green pull off an equalizer as the Black Caps chased down 164 with nine wickets in hand and four balls to spare.

Pakistan’s bowling was reasonable in the Auckland T20I but horrendous at the Seddon Park. The Kiwis would be hoping to end their campaign with another resounding win on Tuesday, December 22 in the third and final T20I at the McLean Park in Napier.

Kane Williamson and Co have played two T20Is at the venue, winning one against Bangladesh and losing the other to England. In the meantime, for Shadab Khan’s men, all they would be wishing is to salvage some pride.

The venue has only hosted two T20Is, but 2019s match between New Zealand and England suggests that a high-scoring affair is on the cards. After being put in to bat first, the Brits hammered 241 on the back of Dawid Malan’s 103 and Eoin Morgan’s 91.

The Kiwis’ folded for 165 in 16.5 overs. The temperature will be around 22 degrees Celsius. The humidity will be on the higher side with the numbers in the high-70s.

Playing Combinations for NZ vs PAK

Tim Seifert has been one of the primary reasons why the Black Caps have taken the 2-0 lead in the series. The right-hander hasn’t gone hell for leather but has been able to accumulate runs without much trouble.

In two matches, he has scored 141 runs at an average and strike-rate of 141 and 133.01 respectively. Having already scored two fifties, Seifert must be raring to get another decent knock under his belt.

Mohammad Hafeez failed to open his account in the first T20I at the Eden Park in Auckland. But the 40-year-old youngster, well and truly, made amends in the second game in Hamilton.

On a day when the other Pakistan batters couldn’t score big, Hafeez, single-handedly, took his team to a respectable score in their 20 overs. The visitors would again be looking for their veteran batsman to step up and deliver in the dead-rubber. 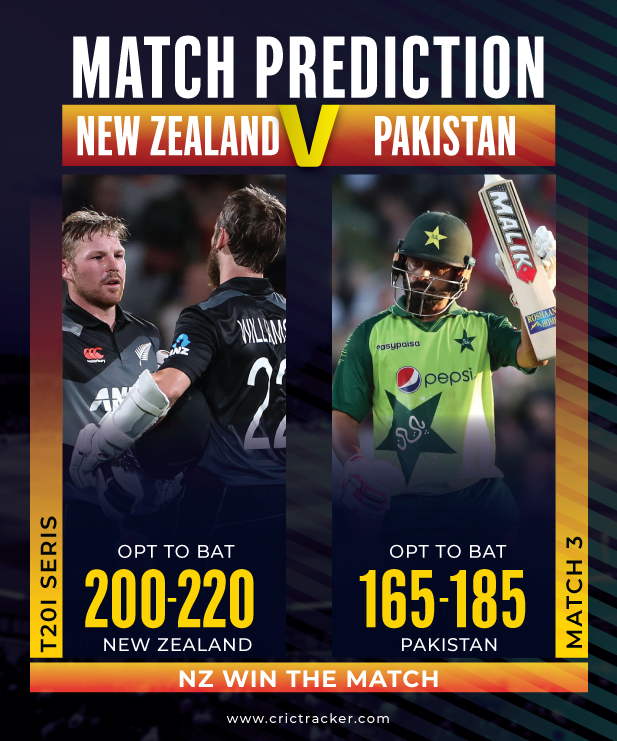