NZ vs PAK: Pakistan Create a Rare Record in the Second T20I | CricTracker.com

NZ vs PAK: Pakistan create a rare record in the second T20I

You do not want to be a Pakistan fan at the moment. Having lost the ODI series 5-0, Pakistan went into the T20I series with a better chance of getting a few wins under their belt. On a given day, any player can perform and single-handedly take the game away. Though the Black Caps were still favourites to win the T20I series too, they knew that Pakistan can never be written off.

In the first T20I, Pakistan were demolished by 7 wickets as Colin Munro easily wiped off the target of 105. The players were being criticized for their lack of ability to read the game and play according to match situations. However, the delivered a surprise performance in the second game. They beat New Zealand by 48 runs.

The top order of Pakistan played an instrumental part in the team’s win. It was the first instance in which 4 batsmen have scored 40+ runs in T20I innings.  Fakhar Zaman and Ahmed Shehzad gave a great started to the team. The former scored a quick fire 50 off 28 deliveries while Shehzad scored 44 off deliveries.

Babar Azam and Sarfaraz Khan ensured that the momentum was not lost by hitting the big shots often. The skipper played a handy knock of 41 that included three sixes while Babar Azam remained not out on 50 off 29 deliveries. A strong batting display took the team total to 201.

The target of 201 proved too hot for New Zealand as they bundled out for 153 failing to complete their quota of 20 overs. This performance has shown that Pakistan are good enough to beat any side in the world. However, they must replicate such performances more often to move up in the international rankings. The senior players must take the responsibility to help the newcomers and shoulder most of the burden to get a positive result in the match. 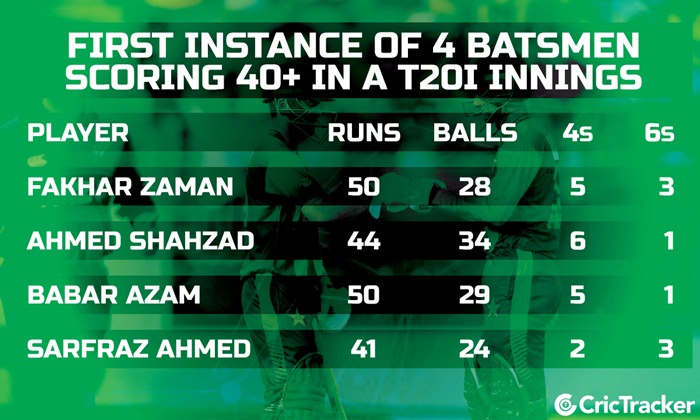