The likes of Pollard and Pooran are coming after a brilliant IPL stint with their respective teams. The 1st T20I of the three-match series between New Zealand and West Indies will be played at the Eden Park in Auckland.

This match will start at 11:30 AM IST (7 PM local). This match and the whole series can be streamed live on Fancode.

New Zealand played the last ODI against Australia before cricket stopped due to Coronavirus pandemic. And now they will resume their international cricket with a home series against the West Indies. The first of the three-match T20I series will be played on Friday with the Caribbean side also resuming their stint in the format. They were one of the first teams to resume cricket in the post COVID era by travelling to England for Test series.

The Kiwis have rested Kane Williamson and Trent Boult for this series as the duo was intensely involved in the Indian Premier League (IPL). Tim Southee is set to lead the side. West Indies also missing their top players Andre Russell and Dwayne Bravo for different reasons. Having said that, the Caribbeans are always dangerous in the shortest format and can never be taken lightly.

It will be cloudy for the whole day in Auckland on Friday. But there is only a little chance of rain and there might not be much of a hindrance in play. The temperature will stay around 18-19 Degrees Celsius during the match.

Last three matches at the Eden Park has witnessed different kinds of scores. With this being the first match of the season, we might witness a big score even as the shorter boundaries will also help the batsmen. Spinners will also play a decent role as they have picked seven wickets in last three matches.

Martin Guptill is playing T20 cricket after a long time but will back himself to come good against West Indies. He has scored 2536 runs in 88 T20Is at an SR of close to 135 and opens the innings.

Ross Taylor is a veteran T20 player and his presence in the middle-order will mean a lot to the team. He has played a whopping 100 T20Is scoring close to 2000 runs at a strike-rate of over 120.

Lockie Ferguson is a champion bowler when it comes to the shortest format. He is coming off a decent IPL season for Kolkata Knight Riders and his death bowling will be a treat to watch.

Nicholas Pooran was a vital cog for Kings XI Punjab in the IPL. He smashed 353 runs in 14 innings at an exceptional strike-rate of 169.71 and will be keen on taking advantage of shorter boundaries in New Zealand.

Kieron Pollard was crucial in Mumbai Indians’ title-winning run in IPL 2020. He batted at five or six on most occasions and scored 268 runs in 12 innings at a whopping strike-rate of 191.42. Pollard loves to lead from the front and it shouldn’t be a surprise if he shines in this series. 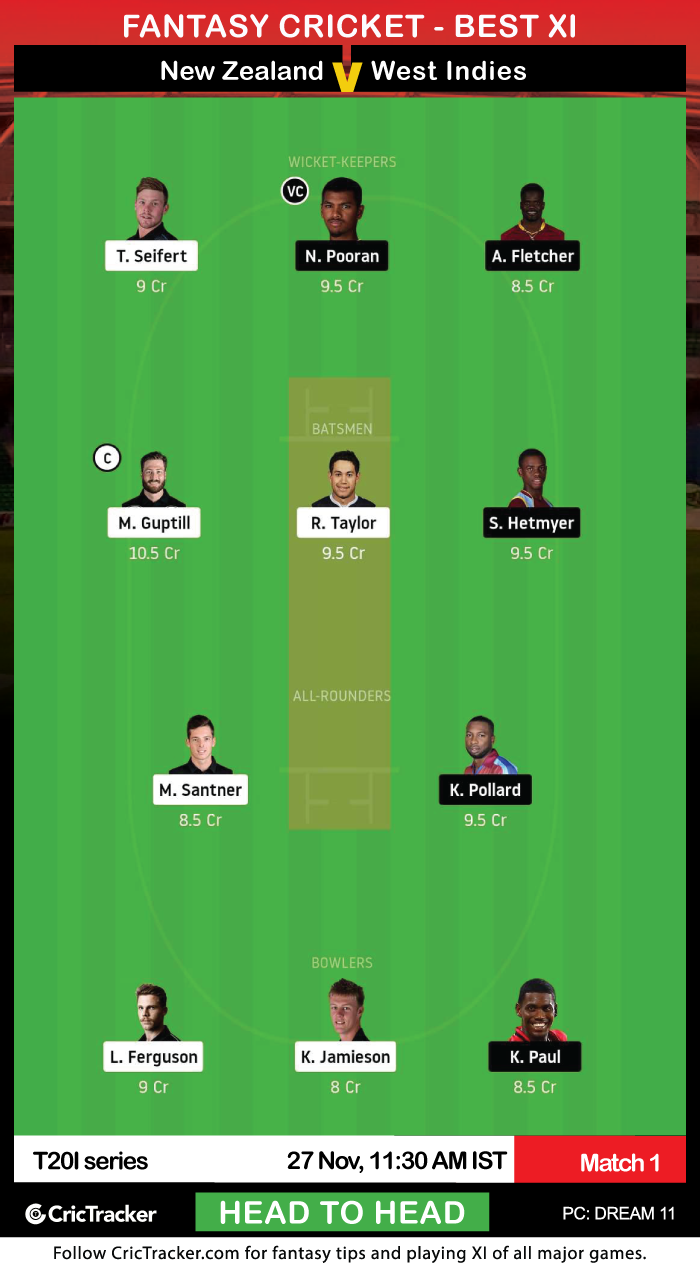 Devon Conway seems to be in line to make his international debut for New Zealand. If he plays, then Glenn Phillips will most probably sit out. You can pick Conway in your Grand League team and if possible, make him captain as he is a good batsman.