Australia womens' is leading the three-match ODI series 1-0 after winning by six wickets on Sunday.

The second game of the three-match ODI series between New Zealand women’s and Australia women’s will be played at the Bay Oval in Mount Maunganui on 7th April 2021.

The match will start at 7:30 AM IST. The live streaming will be available on the Fan Code app.

The Australian women’s team created a world record in the previous match when they won their 22nd ODI match on the trot. No ever team in the history of ODI cricket has won more matches than this team led by Meg Lanning. Hence, the hosts will have an uphill task as they aim to break Australia’s winning streak. On top of that, they would also be under pressure knowing that they will lose the ODI series if they can’t sneak in a victory in this match.

In the first match, the Aussies were at their dominant best. Apart from Lauren Down, who scored 90 batting at the top of the order, no batter could go past 40. There were also contributions from stand-in captain Amy Satterthwaite and Amelia Kerr, but none of them was enough for them to get a big total on the board. The white ferns eventually only managed 212 runs before getting bowled out.

New Zealand did make a good start with the ball though, getting two early wickets within the first powerplay. However, a solid partnership between Ellyse Perry and Alyssa Healy helped Southern Stars to get the required momentum. The duo scored their fifties as Australia marched on towards the total. Ashleigh Gardner got a fifty as well and her side knocked off the target in just 38.3 overs. Winning the first match of any three-match series is quite crucial and the visitors will be eyeing a series win now in the second game.

Captaincy picks for NZ-W vs AUS-W

The star Aussie all-rounder came back in this series after a long injury layoff. She didn’t bowl more than three overs in the first ODI but could be seen given a few more overs in this match. However, she made up for that in the best way possible by scoring an unbeaten 56, guiding Australia to a win in that game.

The young New Zealand all-rounder has been shouldering the responsibility of maintaining balance in this team. In the first match, she looked in good touch with the bat, until she was dismissed for 33. She would be looking to convert her starts and get a big score in the second match. She also managed to pick up a wicket in the first ODI. 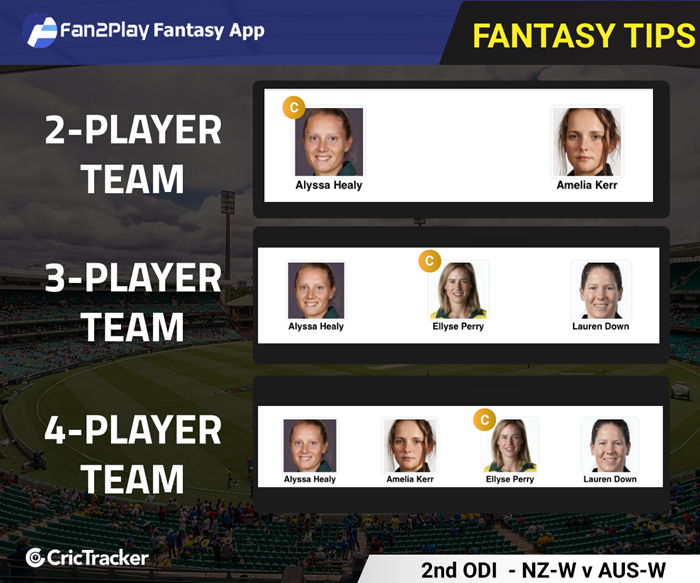