The English skipper Heather Knight was the aggressor in the match-winning stand alongside Tammy Beaumont in the first ODI.

The 2nd of the three-match ODI series between New Zealand Women and England Women will be played at the University Oval, Dunedin.

Brilliant half-centuries from Tammy Beaumont and Heather Knight took the England Women to a comprehensive 8-wicket victory over New Zealand Women in the first ODI at Hagley Oval, Christchurch. After opting to bat, the New Zealand Women were unable to manage a winning total as regular fall of wickets restricted them to 178 in 45.1 overs, with half-centuries from Hayley Jensen (53 from 58) and debutant Brooke Halliday (50 from 54). Each of the seven bowlers used by England managed at least one wicket, whereas Tash Farrant and Sophie Ecclestone returned with two apiece.

In response, a match-winning 94-run stand for the second wicket between Tammy Beaumont (71 from 86) and Heather Knight (67 from 69) after Hayley Jensen removed Dani Wyatt to break the opening stand, took England Women within a touching distance of taking a lead in the series. Lea Tahuhu managed to get the breakthrough, removing Beaumont in 27th over, although the victory was merely a matter of time by then. Natalie Sciver joined skipper Knight, scoring 21 of the 45 that were needed for the win. After a crushing defeat, New Zealand Women will be under pressure to win, if they have to keep the series alive.

The English skipper Heather Knight was the aggressor in the match-winning stand alongside Tammy Beaumont, and she deserves to be appraised for shuffling across her bowling options, which ensured that the opponents were not able to put up a score of substance. To add to her half-century, she bagged a wicket too, and she is more than handy with her latterly developed off-spin.

One of the most experienced players in the 50-over format, Sophie Devine has 2676 ODI runs in her 109-match career at an average of 31.50, and 73 wickets with the ball, which makes her one of the leading all-rounders in Women’s cricket. Though she was unable to click with the bat in the previous game, she has been in a decent bit of form in the Women’s Twenty20. Given that her side is 0-1 down, expect her to fire in the second game. 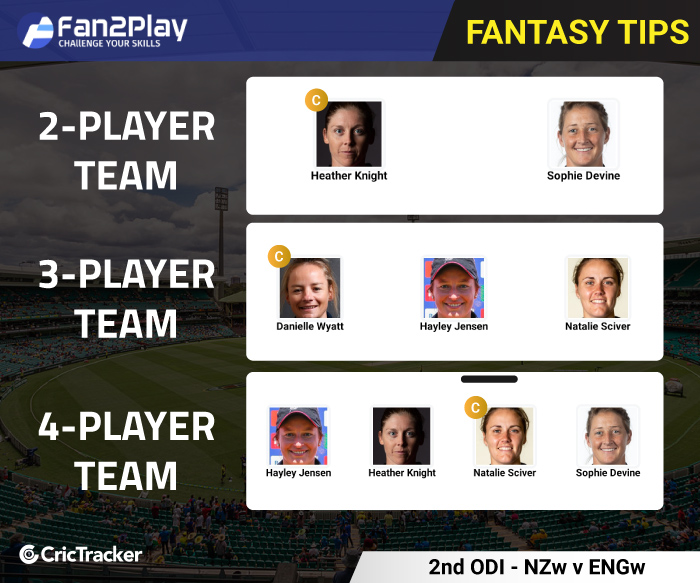