Tammy Beaumont is in good form with the bat.

The third and final match of the ODI series between New Zealand Women and England Women will be played at the University Oval, Dunedin.

England has been quite dominating in this series so far, considering that they won one match by eight wickets while the other by seven wickets. In the previous match, it was a Nat Sciver show all-round. She bowled the match-defining spell of 3 for 26 from nine overs, which allowed England to restrict New Zealand to a small total of 192. After that, when England were 12 for 2 in the chase, she partnered with Tammy Beaumont to construct a good partnership. Sciver scored 63 runs from just 61 balls.

Speaking of Beaumont, she notched up back-to-back 70+ scores in the two innings in this series. However, she would love to sign this series off with a century. Talking about the hosts, they have been pretty disappointing in this series so far. Neither their batters have shown any resistance against the England bowling unit, nor their bowlers have kept them in the match with consistent wickets. This series has gone all wrong for Sophie Devine’s side, but before moving to the T20I series, they would want to have one good win under their belt.

The England opener has been very comfortable against the moving ball in the New Zealand conditions. As an opener, she has kept her composure and scored runs easily. Her two 70+ scores have given her space to get into the mood before the T20s start. She would be eyeing a big knock here to keep her form going on.

One of the most experienced players in the 50-over format, Sophie Devine has 2676 ODI runs in her 109-match career at an average of 31.50, and 73 wickets with the ball, which makes her one of the leading all-rounders in Women’s cricket. Even though she has failed to find her touch in this series so far, with a ‘nothing to lose’ situation on her head, she would be expected to play with a little more freedom. 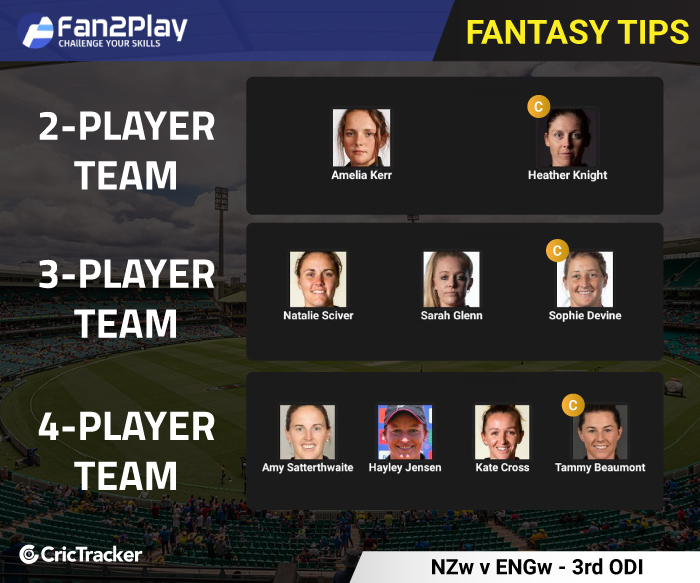