Considering the form of both sides, it is expected to be a riveting encounter and a close one too.

The 7th T20I of the Oman T20I series will be played between Ireland and Nepal at Al Amerat Cricket Ground Oman Cricket (Ministry Turf 1) in Al Amarat.

The razmataz of the Oman T20I series rolls on and the 7th T20I will see Ireland square off against Nepal. Ireland comes into this game after having achieved a comprehensive 66-run win against Hong Kong. Kevin O’Brien, who became the first Irish batter to score a T20I hundred (124 off 62 balls), was the bedrock of their comprehensive win over Nepal.

They’ll now face Nepal, who too are coming after notching up two consecutive victories in the tournament. Their last game resulted in a four-wicket win after they successfully chased down 133 set by the Netherlands. The win was spearheaded by Nepal’s bowlers. Both Sandeep Lamichhane (4-20) and KC Karan (4-17) claimed four-wicket each. Karan was instrumental with the bat too, emerging as the second-highest leading run-getter (31* off 14 balls) in an eventual 6-wicket-win.

As has been the trend thus far in the tournament, the pitch has played well comparatively in the second half, and whichever side wins the toss tomorrow will look to the chase.

Ireland: Kevin O’Brien scored a swashbuckling 124 in the last game to set-up a 66-run win for his side. In all, O’Brien has racked up 186 runs in 3 games and will once again be the key to their fortunes tomorrow. Along with O’Brien, Harry Tector (64 runs in 3 games), Paul Stirling and Andrew Balbirnie will be crucial.

The bowling unit, on the other hand, will be spearheaded by Mark Adair (5 wickets), Stuart Thompson (4 wickets) and Boyd Rankin (3 wickets).

Nepal: Binod Bhandari has been the pick of the Nepal batters thus far. The wicket-keeper has racked up 84 runs across 2 games. Paras Khadka (33 runs) has had a disappointing tournament thus far and the skipper will hope he gets back among the runs tomorrow. 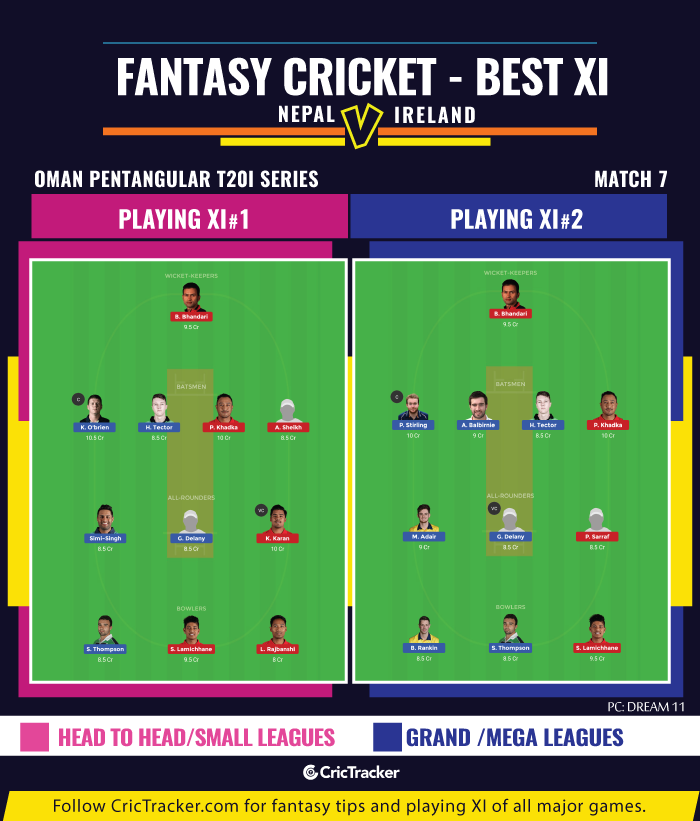 Nepal’s bowlers- Sandeep Lamichhane and Karan KC- have had a great tournament thus far. Picking them against Ireland or even making them captain/vice-captain could be worth a punt.

Considering the form of both sides, it is expected to be a riveting encounter and a close one too. We pick Nepal as the potential winners, solely because of their duo of Lamichhane and Karan KC.