Khawar Ali, Amir Kaleem or any other? Who will be your captain?

The 8th game of the Oman Pentangular T20I Series, 2019 will be played between Oman and Netherlands at the Al Amerat Cricket Ground Oman Cricket (Ministry Turf 1) in Al Amarat.

Netherlands have gone absolutely nowhere in the ongoing Pentangular series in Oman. To start with, Ireland thumped them by six wickets and then it was the turn of Nepal to hand them a four-wicket defeat. Languishing at the fourth spot, the Pieter Seelaar-captained unit’s journey won’t be getting g any easier by any stretch of the imagination. They are next scheduled to play Oman.

Oman have arguably been the standout team in the series with victories in their first two encounters. First, the team, led by Zeeshan Maqsood, demolished Hong Kong by seven wickets and then slapped Ireland with a 43-run defeat. They are placed atop the points table with a Net Run Rate of +2.330, which is way above than Ireland. Netherlands will have to play out of their skins.

There are absolutely no chances of rain and the sun will be out throughout. The temperature will be in the low 30s with the humidity in the 40s. The conditions will be more or less pleasant for playing cricket. All in all, an exciting uninterrupted game is in the offing.

The pitch has played a tad indifferent over the past few encounters. But the teams, batting second has had the advantage. Also, since it’s an afternoon affair, chasing should be the way forward as under natural light, the ball may grip on the surface.

Khawar Ali has been in riveting form of late. Opening the batting in the series, he has gotten only 32 runs. With his slow leg-breaks, Ali has picked up four wickets at an economy of 5.12.

Amir Kaleem bats in the middle order and is currently Oman’s joint highest run-scorer in the series with 46 runs at a strike-rate of 170.37. Moreover, he has three wickets to his name. 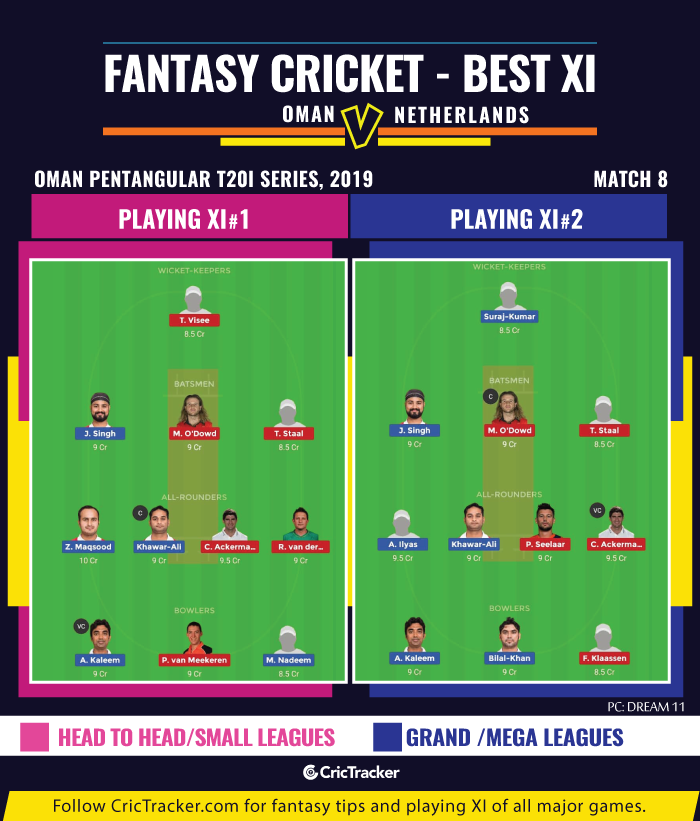 There are quite a few quality all-rounders for the next match. Among them, Khawar Ali should be a must.

Oman are expected to win the match.