Mohammad Rizwan’s blistering century at the top of the order helped Pakistan to beat South Africa by a slender margin of 3 runs in the first T20I at Lahore. Opening the batting, Rizwan scored an unbeaten 104 off just 64 balls, to help his side to post a competitive total of 169 runs on the board. The next highest run-scorer for Pakistan in the match was Haider Ali, who scored 21. That goes on to show the extent to which Rizwan’s contribution helped his side.

In reply, even though South Africa got off to a rollicking start, with their openers putting on a solid partnership of 53 runs, the visitors lost wickets at regular intervals, and in the end, fell short of the target by just 3 runs. Reeza Hendricks top-scored for South Africa, scoring a sedate 42-ball 54. Now, South Africa have to compulsorily register a win in the second T20I that starts on February 13th, 2021, if they have to stay alive in the series.

The second T20I match too will take place at the Gadaffi Stadium in Lahore. The pitch is one where batsmen will definitely get rewarded for their shots, as Mohammad Rizwan showed in the first rubber. But the key for the willow wielders would be to spend some time out in the middle so that they can cash in later. The temperature will hover around 20 degrees, and there is absolutely no chance of rain.

Playing Combinations for PAK vs SA

Mohammad Rizwan is in scintillating form in T20I cricket. The dashing wicket-keeper batsman scored a century in the first T20I to help his side to emerge victorious in a cliff hanger of a clash against the Proteas. Even in Pakistan’s previous T20I series against New Zealand, it was Rizwan who scored a 59-ball 89 in the third T20I. Expect him to produce another match-defining performance in the second T20I as well tomorrow.

In the first T20I against Pakistan, Andile Phehlukwayo scalped the wicket of Haider Ali, at a time when Ali was looking dangerous and trying to cut loose. He also scalped the wicket of Faheem Ashraf at the fag end of the innings. In his last five T20Is, the right-arm pacer has picked up 8 wickets. If Phehlukwayo can price out the Pakistan top order in the second T20I, then the visitors will have hopes of winning the second T20I and squaring the series.

The Prediction is for Pakistan to win the match. 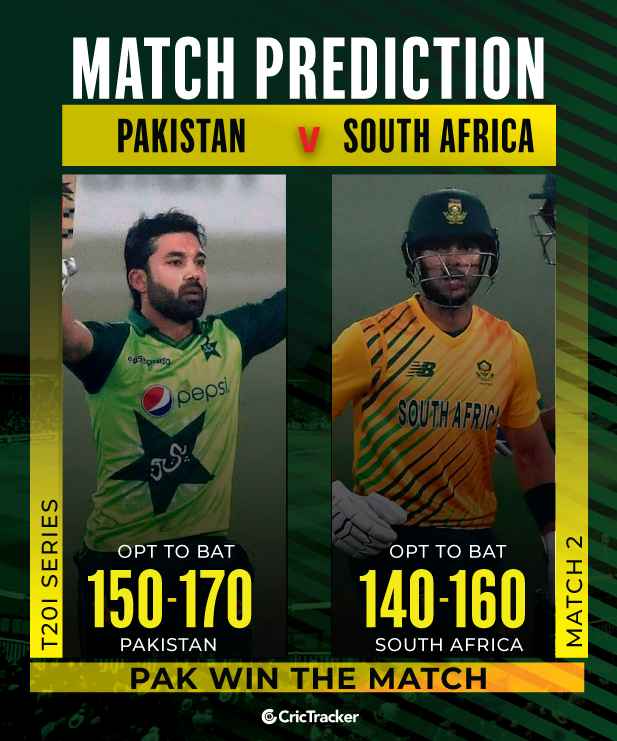