Will Pakistan pull one back on the visitors?

Alarm bells have rung for the Pakistan cricket team right at the stroke of the Cricket World Cup 2019. After winning the five-match series against Zimbabwe last year, the ‘Men in Green’ have not won a single ODI series. In recent times, they drew a series against New Zealand in the UAE. Then, they played in South Africa and lost 2-3 to the home team. Now, Australia managed to win all the three games of the ongoing five-match series and thus bagged the honours.

One might argue that Pakistan isn’t playing its best eleven against Australia. But, it has been over eight months now since they clinched a bilateral ODI series. Their performance in the Asia Cup last year wasn’t great either. The bowlers have hardly lived up to the expectations while the batsmen have been letting the team down consistently. A whitewash at home awaits them as they take on Australia in the 4th ODI at Dubai.

The Dubai International Cricket Stadium is a good venue to bat. Also, the spinners will find some assistance on the track as the pitches would have dried up a fair deal due to the heat. It will be a sunny day on Friday when these two teams will play. The pitch could quicken up during the second innings due to increased humidity levels. Dew could also play a role.

Mohammad Hasnain is quite an exciting talent and bowls at a great pace. However, he is a work-in-progress and has leaked a lot of runs in the last two games that he played. Thus, Mohammad Amir is likely to come back into the eleven in the 18-year-old’s place. Even though they have two good batsmen waiting in the ranks, there seems no room to fit them in. Thus, the batting order is expected to be the same.

Heading into this game, Australia will look to give opportunities to a few players who have been warming the bench. After his match-winning knock against India, Ashton Turner hasn’t really got a lot many opportunities. He is likely to play the last two games and could replace either of Shaun Marsh or Peter Handscomb. Also, the visitors will consider giving Kane Richardson a go out there in the middle.

The prediction is that Australia will win the match and make it 4-0 in the series. 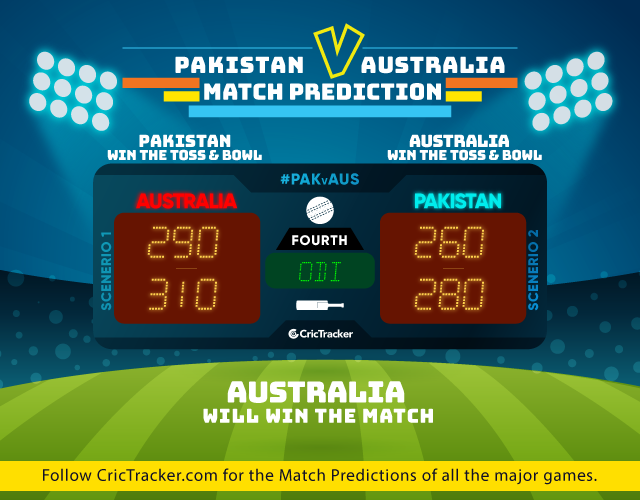