Pakistan vs New Zealand, 3rd T20I, Match Prediction: Who will win the Match?

The Kiwis haven't done much wrong to be on the losing side but they will need a special performance to beat the hosts.

Pakistan have become the T20 specialists. They have now won 11 consecutive series in the format and are on their way to inflict a whitewash on their opponents for the second time on the trot. New Zealand posed a bigger threat to the World Number 1 team in both the matches but Pakistan were up for the challenge and their clinical display got them over the line.

The second T20I was the best chance for the Kiwis to level the series as they batted first after winning the toss to put the hosts in an unfamiliar territory. Colin Munro once again got them to a brilliant start. But the spinners and some exceptional bowling from Shaheen Afridi tied them up in the middle overs. It was only due to Corey Anderson’s fireworks they managed to cross the 150-run mark.

However, while defending the total, their best bowler Ish Sodhi conceded most runs and all their hopes of coming back in the series were shattered. Pakistan approached the chase cleverly with Fakhar Zaman attacking while Babar Azam, the epitome of consistency, looked to bide his time in the middle. Things went down to the wire in the end but the veteran Mohammad Hafeez didn’t let the opposition comeback in the contest.

Expect a cool weather in Dubai with the temperatures ranging in the early 30s. As far as the pitch is concerned, a similar kind of strip is expected. The middling totals are proving to be an exciting contest as there is a balance between bat and ball. Yet another enthralling game is on the cards between two good teams.

Pakistan, having won the series, will definitely look to test their bench. Waqas Maqsood, the left-arm pacer, deserves a go after sitting on the sidelines for five consecutive matches and Shaheen Afridi will make way for him in that case. They can also be tempted to play two left-arm seamers by resting Hasan Ali for Usman Khan. Also, Hussain Talat has a chance to play in place of most probably the senior man Shoaib Malik or Asif Ali who has so played all the five T20Is.

One has to feel for New Zealand. They haven’t done much wrong in both the matches but their opponents have notched up their game every time. The Kiwis will look to draft Mark Chapman in the playing XI who is touted to be a better player of spin. Either Tim Seifert or Glenn Phillips will make way for him while in the bowling department, Tim Southee might get some rest with a lot of cricket still to be played on the tour.

The prediction is for Pakistan to whitewash New Zealand as well. 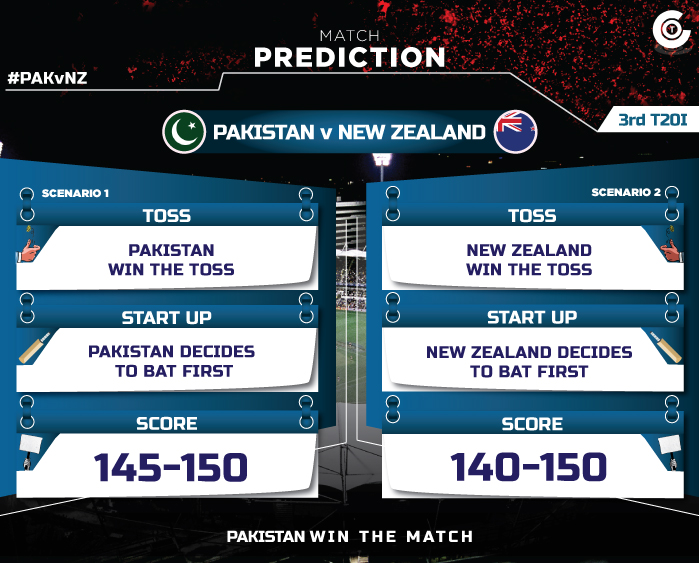 Get the latest Cricket News and updates from the India vs West Indies series, Match Predictions, Fantasy Cricket Tips and lots more on CricTracker.com.