The Lankans have lost their last six T20Is versus the Men in Green. Their last victory came way back in December in 2013 in Dubai.

Sri Lanka came for the tour of Pakistan with a depleted side. The hosts were expected to roll them over without much fuss. However, the Lankans have come out firing on all cylinders. The scorecard in the ODI series showed 2-0 in favour of the Men in Green, but they had to strain hard to get over the line. It’s now time for the T20I series, starting October 5 at the Gaddafi Stadium in Lahore.

Dasun Shanaka, who was exceptional in the One Dayers, will be in charge for the shorter format in Lasith Malinga’s absence. Sri Lanka has lost their last six T20Is versus Pakistan with their last win coming back in December 2013 in Dubai. But bearing in mind their show in the ODIs, the home team, also the ICC’S number-one ranked T20I team, won’t be undermining them by any means.

Six T20Is have been played thus far in Lahore and scores in excess of 170 have been pretty common. The average first-innings score is 180. The teams batting first has had the numbers in their favour. The chasing sides have won thrice, but the games went down to the wire. There are no predictions of rain with the temperature in the high 20s. There will be dew with the humidity in the 60s and 70s.

Fakhar Zaman had a decent outing in the third ODI and he’ll be a key member in the T20Is. He would be mindful that he didn’t have a great T20 Blast for Glamorgan. In the same event, Babar Azam was the leading run-scorer and he’ll be Fakhar’s opening partner. It means that Ahmed Shehzad will have to warm the bench. Umar Akmal made his comeback and he’s likely to find a place in the eleven.

Iftikhar Ahmed can churn out the big shots and can also bowl handy off-breaks. He may keep Asif Ali out of the lineup. Haris Sohail is in good form and his role will be important. Mohammad Hasnain didn’t play the ODIs, but the youngster may get a chance in the shorter format ahead of Wahab Riaz. Imad and Shadab have been impressive in the format along with the pace duo of Amir and Shinwari.

Avishka Fernando disappointed in the ODIs after a lot was expected of him. He’ll want to make amends. Oshada Fernando also couldn’t do much in the 50-overs format. Danushka Gunathilaka played exceptionally in the final ODI and he must be in good stead. The onus will be on Shehan Jayasuriya and Dasun Shanaka, both of whom can turn up with some lusty blows in the hour of need.

Bhanuka may edge Samarawickrama out following his impressive knock in the last game. In bowling, Hasaranga was decent versus New Zealand at home and he’ll want to replicate the performance in the upcoming games. He’ll have Sandakan for company. Udana’s change of pace needs to come to the fore on decent batting strips. Pradeep and one of Rajitha and Kumara will be the other pacers. 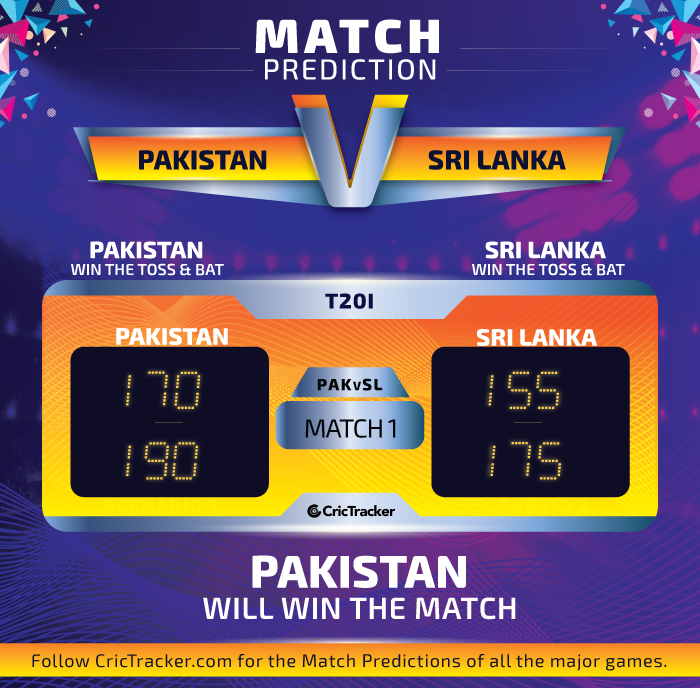