Babar Azam failed in the first game. Can he be made the captain for the next match despite failure?

The 2nd T20I of the three-match series between Pakistan and Sri Lanka will be played at the Gaddafi Stadium in Lahore.

Not many would’ve given Sri Lanka much of a chance of beating Pakistan in the first T20I at the Gaddafi Stadium in Lahore. However, the team, captained by Dasun Shanaka, soared above the expectations and won by 64 runs. Their top order shone and the bowlers turned out to be a tough nut to crack. The triumph also ceased their six-match T20I losing streak versus Pakistan in T20Is.

The second game is scheduled to take place on Monday, October 7 and the visitors are now in with a chance of winning the series against ICC’s number-one ranked T20I side. The Men in Green, on the other hand, would’ve been stunned by last match’s result. Their batting turned out to be a major concern. Ahead of their must-win encounter, Pakistan need to make a proper game plan to win.

There are no chances of rain in Monday’s match. The atmosphere will be a pleasant one for playing cricket. The skies will be clear with no clouds and the temperature will be around the 25 degrees Celsius mark. The humidity will mostly be in the 50s with a bit of dew to play its part.

The pitch has generally favoured the team, batting first and has gotten slower, especially in the second half. Scoring runs in the powerplay will hold the key as run-making can be a little tough later on. Both the teams, have bowling as their stronger point and should go for defending totals.

Danushka Gunathilaka– The southpaw is in jaw-dropping form. After his century in the losing cause in Karachi, he turned up with the Man of the Match performance in the first T20I. He has gotten quick-runs and has a sound technique.

Babar Azam– Babar Azam may have floundered in the last game, but he is very well capable of making amends. He is known for his consistency and has excellent outings in the World Cup and then for Somerset in the T20 Blast in England. 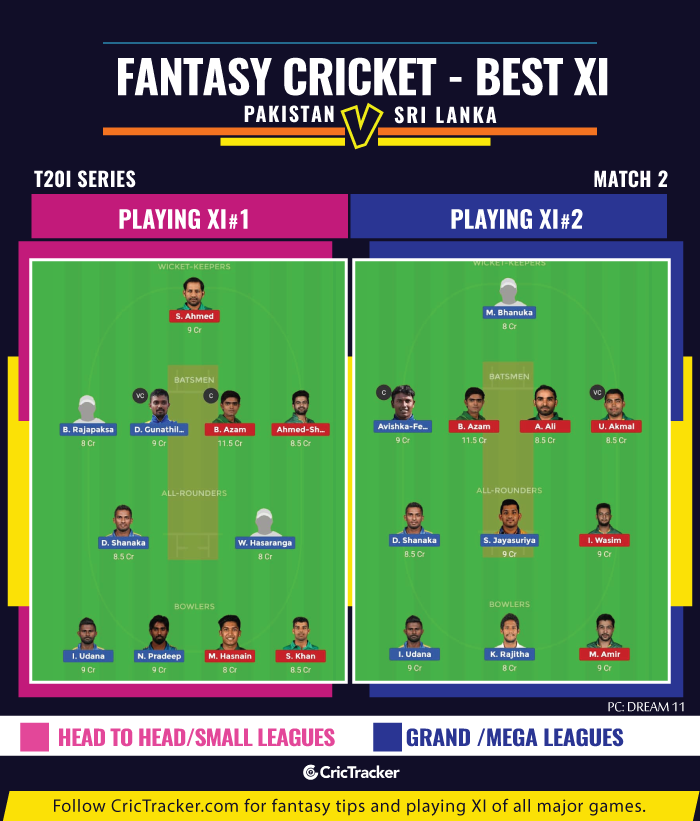 Pakistan can make quite a few changes in their batting for the next match. Hence, it will be better to wait for the elevens before forming the team.

Pakistan are expected to bounce back and draw level in the series.