Kasun Rajitha is ruled out for this game.

Pakistan won the toss and elected to bat first

The 2nd Test of the two-match series between Pakistan and Sri Lanka will be played at the National Stadium in Karachi.

A few days ago, a historic occasion was marked in Pakistan cricket. After about ten years, Test cricket returned to the country. However, this game between the hosts and Sri Lanka didn’t pan out as per the expectations. Rain played spoilsport in Rawalpindi and thus a lot of action couldn’t be witnessed. While this was surely disappointing, the fans turnout at the stadium was incredible.

They would have been delighted to watch some fine batting from the local heroes – Abid Ali and Babar Azam. Now, the action moves to Karachi for the second Test. Once again, huge crowds are expected to witness this game and the fans would have a lot of expectations on the home team. They will hope for some non-stop action on all the days of this encounter.

The weather in Karachi is predicted to be good for the next five days. A delightful news for the fans is that the chances of precipitation are very less. While there is a 10 per cent chance of precipitation on the first two days, the other days are expected to be nice and sunny.

It’s been over ten years since a Test match was last played in Karachi. The track here has always been a batsman’s delight. Bowlers will have to work extremely hard and be on the top of their game to give their team an edge over the other.

Kasun Rajitha is ruled out and won’t play this game. Usman Shinwari is doubtful since he has been hospitalised due to fever.

With the kind of form they are in at the moment, Babar Azam and Dimuth Karunaratne should be there in your Dream11 Fantasy team. Abid Ali is a good option. Dhananjaya de Silva is a must in your teams since he can contribute in all three departments of the game. 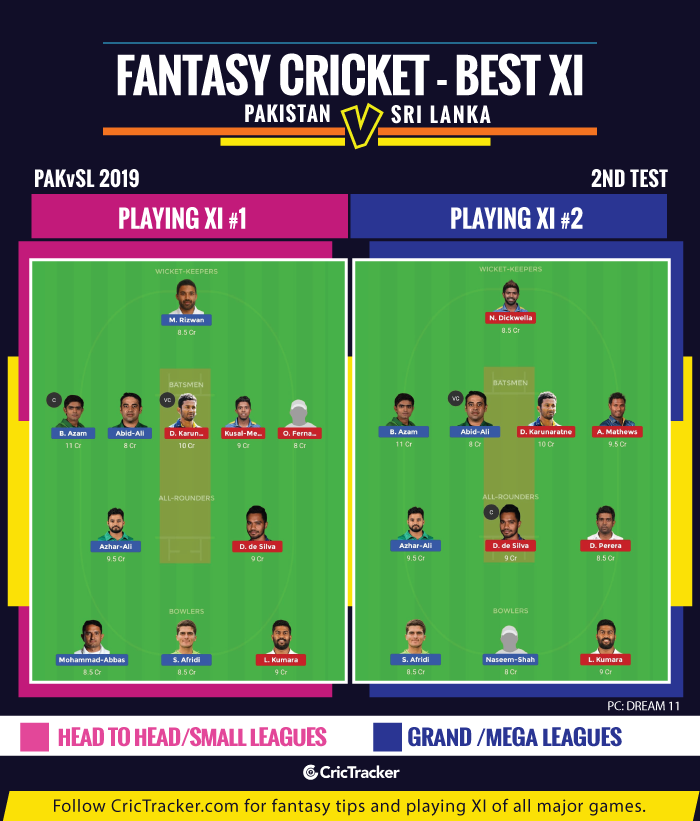 Abid Ali might be a late bloomer and surely doesn’t have much experience at the highest level. However, he has been one of the most consistent performers in domestic circuit. He proved his potential in his debut Test and you should have him in both your Dream11 Fantasy teams.

If Yasir Shah get a chance in the playing XI, it wouldn’t be a bad ploy to pick him in your Fantasy team.

Pakistan is expected to win this game as well as the series.