It would be wise to wait for the toss to take place as you can pick more batsmen from the team batting first.

The 2nd T20I of the three-match series between Pakistan and Sri Lanka will be played at the Gaddafi Stadium in Lahore.

Sri Lanka have clearly punched above their weight in this series. And they have a golden chance now to inflict a whitewash on the World number 1 T20I side. Their youngsters, especially, Bhanuka Rajapaksa has been brilliant in the series so far and the visitors would like to continue the good run. It will also be interesting to see if they give an opportunity to the benched players before leaving the country.

Pakistan, surprisingly, have been poor. They bossed the format until 2019 started and now have lost three series on the trot. They might also be in danger of losing their top spot in the ICC Rankings. The home crowd has witnessed back to back disappointing performances and the Men in Green will hope to bring smiles to the fans’ faces at the end of the tour.

After the unseasonal rains in Karachi which washed out the first ODI, the clouds have largely stayed away. The forecast is clear for this game as well. The temperature will hover around 24-25 Degrees Celsius according to AccuWeather.

The surface at the Gaddafi Stadium has turned and there is a possibility that this match will be played on a used pitch. Spinners are likely to dominate more in this match in that case. So far, the template is win the toss, bat first and win the match and the same is likely to continue.

Bhanuka Rajapaksa is definitely a must now in your fantasy team. His strokeplay was excellent in the previous game and he will be looking to stamp his authority in this game as well. Danushka Gunathilaka continues to remain a threat for Pakistan. Nuwan Pradeep is another brilliant bowler who has proved his mettle in this series and should be in your team.

Pakistan are not used to seeing Babar Azam fail in the T20Is and one might feel, the big knock from him is just around the corner. 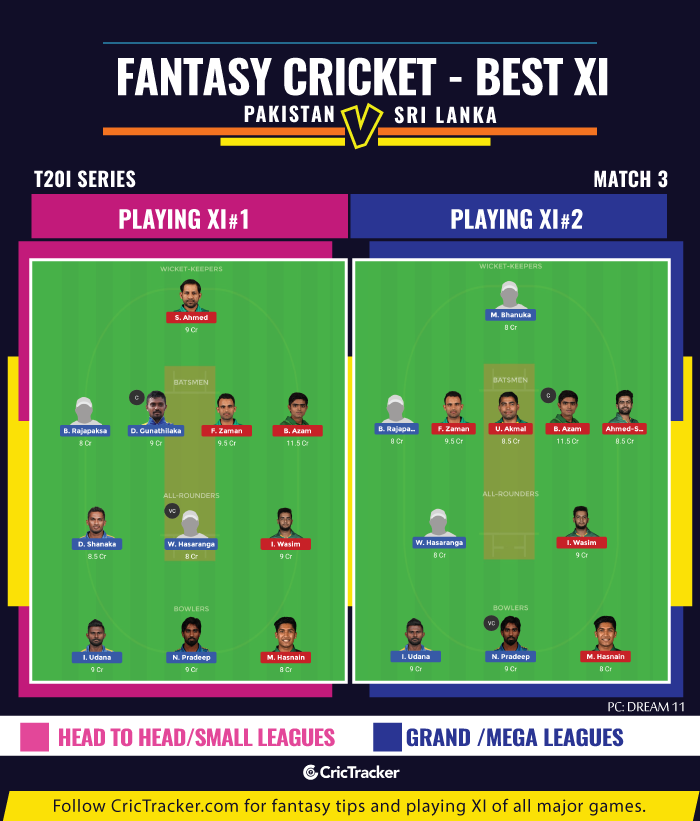 It would be wise to wait for the toss to take place as you can pick more batsmen from the team batting first. The pitch turns a lot in the second innings and only one or two batsmen might contribute.

Pakistan might win this dead rubber but expect Sri Lanka to make it tougher for them if the visitors win the toss.