The sun is expected to come out paving the way for some action in the middle.

It has been pouring down in Karachi over the past few days. The first ODI between Pakistan and Sri Lanka at the National Stadium had to be called off, almost four hours prior to the cut-off time. The groundsmen looked pretty disinterested knowing what was to come. The second encounter of the three-match series was set to take place on Sunday, September 29, but it had to be postponed.

The Pakistan Cricket Board (PCB) and the Sri Lanka Cricket (SLC) decided to reschedule to the game to Monday, September 30. It’s because more rains are expected on Sunday. It was the first abandoned match ever in Karachi due to weather. Both sides would be itching to get on the park after not being able to play. The fans also had to return disappointed after finding it tough to reach the venue.

As per Accuweather, the weather on Monday looks like something positive. The sun will be out throughout and there are no chances of rain whatsoever. The humidity will be in the 50s and 60s. The clouds are expected to stay away. The pitch used to produce scores of around 300 during the 2000s and it has gotten better. Teams will look to bat first and put pressure on the opposition.

Fakhar and Imam will open the batting and the duo needs to set the platform in the powerplay. The onus will be on Babar Azam to steady the ship. Haris and Asif Ali can hit the ball hard. The batting has depth with even Wahab being effective lower down the order. Wahab Riaz will share the pace attack with Mohamamd Hasnain and Mohammad Amir. Imad and Shadab are the spin-duo.

The Lankan batting looks a bit out of power after a few of their players opted out of the tour, citing security concerns. A lot will depend on how Avishka Fernando and skipper Lahiru Thirimanne step up. Lahiru Kumara and Nuwan Pradeep bowled well in Bangladesh. Isuru Udana has loads of experience. Wanindu Hasaranga and Lakshan Sandakan are the spin bowling options for Lanka. 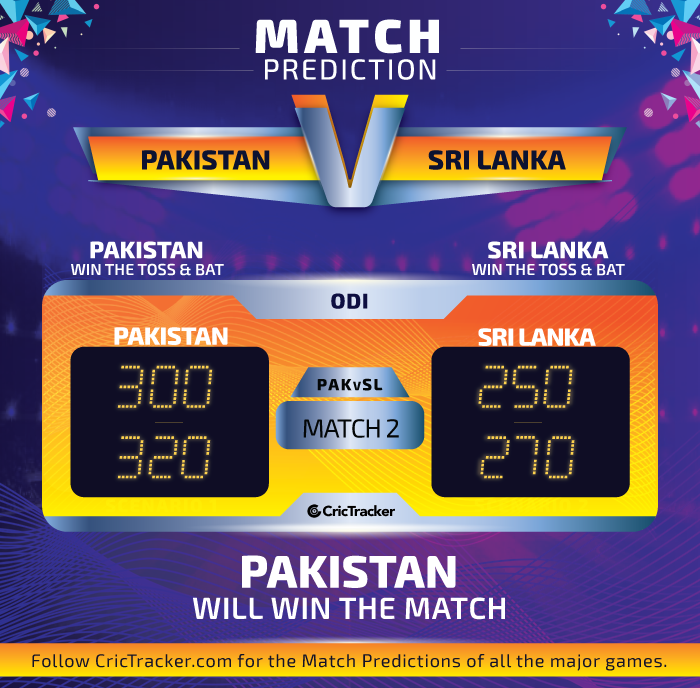