Can the Pakistan batsmen put up a better in front an in-form Lankan bowling attack.

Sri Lanka have managed to absolutely stun the Pakistan cricket team in the last three days or so. The Islanders didn’t lose hope after the 2-0 defeat in the ODI series. Rather, they came out all guns blazing and thrashed the Men in Green in the three-match T20I series at the Gaddafi Stadium in Lahore. Dasun Shanaka and Co have already won the series with a 2-0 lead, stamping authority.

It’s been a collective effort from their bowlers and batters that carved the triumph for the visitors. The last game on Wednesday, October 9 is a dead rubber. Even as Lankans will be aiming for a historic outing, the hosts wouldn’t want a series whitewash at home. Sarfaraz Ahmed’s men haven’t been clinical with the bat and the Lankan batters haven’t allowed them to get away either.

The pitch in Lahore has been good for batting. But it has become slower as the game has progressed. The spinners have gotten turn, especially the leg-break bowlers. Both the matches were won by the team, batting first. As far as the weather is concerned, there are no chances of rain. The temperature will be around the 24 degrees Celsius and 28 degrees Celsius. The humidity will be in the 50s.

Pakistan are likely to make a few changes for the last game. Umar Akmal bagged a couple of golden ducks and he may make way for Haris Sohail, who surprisingly hasn’t gotten a single game. Shadab Khan hasn’t looked at his best on a helpful strip and Mohammad Nawaz is likely to replace him. The team has been heavily dependent on Babar Azam, who has looked completely out of sorts in  the series.

Ahmed Shehzad has floundered as well along with skipper Sarfaraz, who has looked clueless. There was a lot of expectations from Mohammad Amir, but the speedster has remained wicketless and has leaked runs at an economy of 8.12. Imad Wasim has shown a bit of fight though. The southpaw got a breezy 47 in the last game. With the ball, he has only one wicket, but with a good economy of 6.37.

The Lankans may not wish to change their winning combination despite pocketing the series. Bhanuka Rajapaksha has been a revelation. In his maiden international series, the left-hander has amassed 109 runs at a strike-rate of 155.71 with a top score of 77 in the previous match. Danushka Gunathilaka has been in decent rhythm. However, there’s a bit of concern with Avishka Fernando.

The opener has a strike-rate of under 100 and is one of the rare Lankan batters to not get going on the tour. Shanaka has been hitting the ball well with a strike-rate of 176. In the bowling department, Nuwan Pradeep has picked up seven wickets. Isuru Udana and Wanindu Hasaranga have lent him appropriate support. Rajitha has also been tough to pounce on with an economy rate of 4.42. 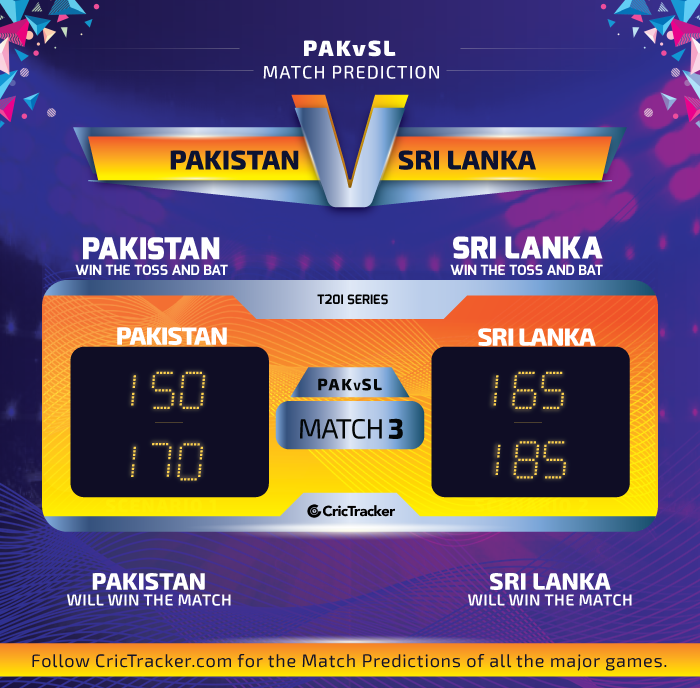