The hosts completed a massive victory against their counterparts in the first match.

While Pakistan was always the favourites coming into this series, nobody would have expected them to stream-roll over West Indies the way they did last night. It was an absolute annihilation and basically was a contest between the men and the boys. The West Indies completely surrendered to a much superior batting and bowling unit of the hosts and conceded a 1-0 lead in the 3-match series.

The stage will be set again tonight as the matches are scheduled on back-to-back days and the Caribbean boys will like to pull it back to push the series into the decider. However for that to happen, they will have to punch well above their weight.

The wicket for the first game was a typical Pakistani wicket. Flat and hard, with no movement available off the deck at all which we have seen over the years in Pakistan unless they produce an absolute green top. It was a 180-wicket and although Pakistan scored 20 too many, thanks to a scintillating finish by Shoaib Malik and Faheem Ashraf, it still could have been close if West Indies had chased a little smarter. To get bundled out on 60 on that pitch was unexplainable, to say the least.

Although the team batting first won it by a handsome margin yesterday, it doesn’t mean these are bat-first conditions. The fact that West Indies lost it was purely because of their lack of quality and application and not because they didn’t bat first. With more and more chances of dew taking effect as the evening progresses further, batting second is actually more beneficial and the captain winning the toss tonight should be choosing to chase without a second thought.

Hussain Talat and Asif Ali made debuts for Pakistan as expected and while Asif failed to make a mark, Hussain showed the glimpses of his talent batting at no. 3. Both of them are likely to be persisted with as they are rated highly by the Pakistani management and they will like to make this opportunity count and use this as a stepping stone to earning a place in the 50-over side as well.

Babar Azam opening the batting was not a surprising call either as he is someone who is better off batting with the field restrictions. He finds it difficult to keep up with the run rate in the post-powerplay period costing the team the momentum at times. The 23-year old will again bat at the top of the order with Fakhar Zaman, while the captain Sarfaraz Ahmed and Shoaib Malik will be the backbone of the middle order batting at no. 4 and no. 5 respectively.

The Pakistani bowlers were on fire yesterday with Mohammad Amir and Mohammad Nawaz providing early breakthroughs and then Shadab Khan and Hasan Ali chipping away in the middle overs to make sure West Indies was never on track for the chase. The quartet will be keen to continue the good work and pile the pressure on the visitors again.

West Indies put out the best XI on the park that they could have out of the squad that they had, but unfortunately that was nowhere near good enough. However, they don’t have too many other options and they will probably make just one change in the XI bringing in Andre McCarthy on the place of the injured Veerasammy Permaul.

West Indies, if anything, will have to play sane cricket which they didn’t do last night. Each and every batsman came out swinging without any game-plan and that never works against a quality attack. While you have to play your shots chasing a big total, throwing the bat at virtually everything can’t be the way. If the likes of Andre Fletcher and Chadwick Walton give themselves a slight extra bit of time at the crease and get used to the pace, they are good enough hitters of the cricket ball to make a difference.

West Indies will also have to improve their fielding which was a big let-down yesterday. The ball slipped through the hands of the fielders quite a few times, letting the singles and the twos convert into boundaries, much to the embarrassment of the support staff sitting in the dug-out. They will surely have spoken about it and will want to be much tighter in that aspect.

The prediction is for Pakistan to beat West Indies and take an unassailable lead of 2-0 in the series. 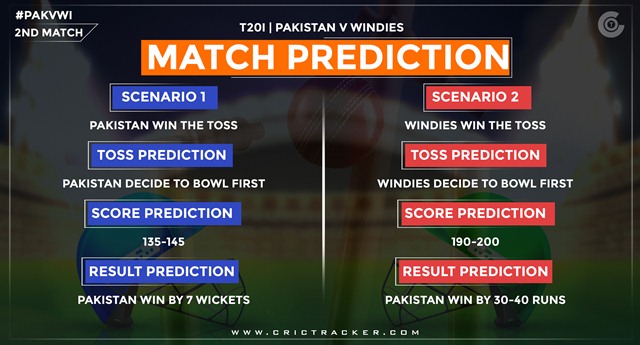