Check out the availability of Windies skipper Stafanie Taylor for the first ODI.

Pakistan Women bounced back in the T20I series to escape a whitewash against the Windies Women at home after a huge 71-run defeat. Pakistan went down in the Super Over during the 2nd T20I but managed to sneak through a 12-run win in the final ODI. With the same confidence, the Pakistan team will be going into the 3-match ODI series to be played in Dubai.

Things will be tougher in the ODI series for Pakistan with the return of Stafanie Taylor. At present, both Windies and Pakistan are on the same lines in the ODI format. Windies won their recent ODI game after losing four while Pakistan lost each of their last four ODI matches. This series will be crucial for both teams who are placed at 5th and 6th in the ICC Women’s ODI Championship.

The first game of the 3-match ODI series between Pakistan Women and Windies Women will be hosted by the Dubai International Cricket Stadium.

This game will be the first Women’s match at the Dubai International Stadium in any format. Generally, the track has a bit of help for the spinners in the Men’s cricket. However, given the variation in the bowling speeds in Men’s and Women’s cricket, the pitch can be judged only after one game.

Aiman Anwer could start ahead of Diana Baig give their recent form.

Since the start of 2018, Sana Mir has picked up 19 ODI wickets which are the joint most for any player in Women’s ODI cricket. She claimed those wickets in seven games while Poonam Yadav, who also has 19 wickets in this span, featured in 11 ODIs. Sana Mir has two 4-fers, two 3-fers and two 2-fers in those seven matches. She also scored 137 runs in those seven innings including four 20+ scores. 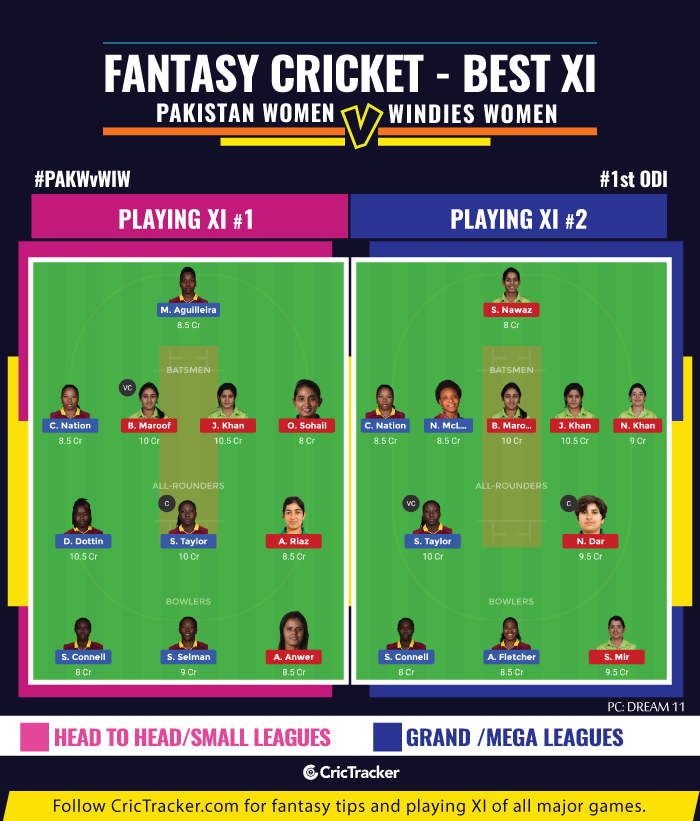 Given the return of Stafanie Taylor, not more than one of Nida Dar, Deandra Dottin, Sana Mir and Taylor can be picked. In the ODI format, Dottin doesn’t open the innings but given the form she has been recently, it will be tough to overlook her.

Windies Women are expected to start the 3-match ODI series against Pakistan with a convincing win.