Whom should be picked as a captain among Deandra Dottin and Bismah Maroof?

Windies Women began their tour of Pakistan with a grand win as they defeated the hosts by a big margin of 71 runs. After electing to bat first, the former WT20 champions were powered by an unbeaten 60-ball 90 from Deandra Dottin. The all-rounder has continued as the opener in the shorter format, a move that Windies Women opted for during the recent Women’s WT20 and it got them the results.

Chedean Nation scored an unbeaten 35-ball 50 and the duo shared 96 for the 3rd wicket from the last 49 deliveries. This partnership helped the Windies Women to get to a winning total of 160/2. Except for the skipper Bismah Maroof and vice-captain Javeria Khan, all the remaining batters failed to get to double digits. As a result, the hosts were bundled out for just 89 in 18 overs.

The second game of the 3-match T20I series between Pakistan Women and Windies Women will be hosted by the Southend Club Cricket Stadium, Karachi.

The first T20I at the Southend Club Cricket Stadium in Karachi produced a decent wicket for the T20 format. The slow bowlers were rewarded for accurate line and lengths.

Aiman Anwer could be replaced by Anam Amin while Aliya Riaz could retain her place despite a poor game with the ball given the fragile batting line-up.

The pace duo of Shamilia Connell and Shakera Selman is ideal for exploiting low and slow surfaces. They make the batters struggle for runs with their pace and fetch wickets when someone tries to attack.

Deandra Dottin opening the innings makes her first choice for the captain or at least vice-captain. The likes of Bismah Maroof and Nida Dar can be picked for the other multiplier role. Javeria Khan and Kycia Knight will be second tier players for multipliers. Shamilia Connell, Shakera Selman, and Nashra Sandhu are also good enough for these roles. 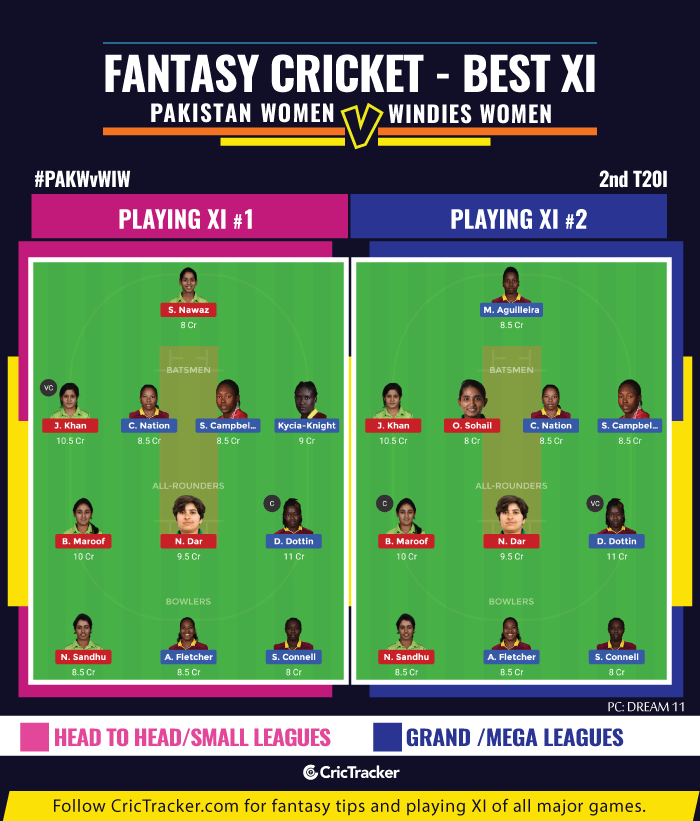 The first T20I gave a brief idea of what the Windies Women’s batting order will be like in the absence of all-rounders Matthews and Taylor. Kycia Knight opens along with Dottin while Shemaine Campbelle and Chedean Nation take No.3 and No.4 respectively.

Windies Women are expected to seal the T20I series with yet another comfortable win over Pakistan.