Babar Azam averages 106 with the bat so far in this tournament. 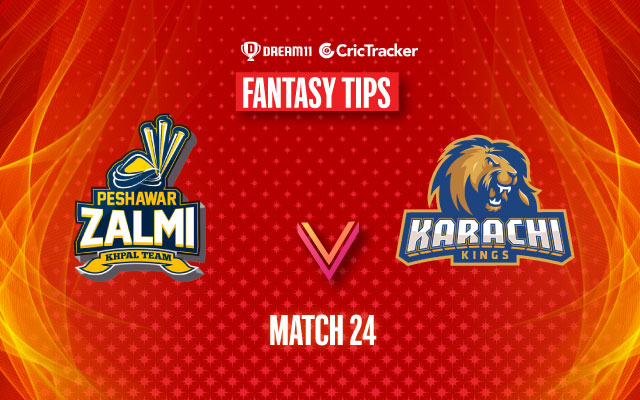 Peshawar Zalmi will square off against the Karachi Kings for the second time in the PSL 2021 on Tuesday. Peshawar Zalmi have had a roller-coaster of a tournament so far, having won 4 and lost 4 matches. They had lost to Multan Sultans by 8 wickets in their previous match and will need to make a comeback in this match. Currently, they are at 3rd spot in the standings with 8 points.

On the contrary, despite half-centuries from Babar Azam and Najibullah Zadran, Karachi Kings failed to win their last match against Islamabad United. This was the 2nd loss in a row for the Kings. Kings had beaten Zalmi in their previous battle by 6 wickets, which gives them a slight advantage coming into this match.

Batting has become relatively easy and we saw some brilliant batting display in the last 4 matches. There is not much for the spinners on this track and whoever wins the toss should bowl first.

Sherfane Rutherford bought up his 1st half-century in the PSL 2021 in the last match against the Multan Sultans, scoring 56 runs from 40 balls. Overall, he has scored 210 runs in 8 matches at an average of 35.

Babar Azam is always a consistent performer for whichever team he plays. He is the leading run-scorer in this tournament with 424 runs in 7 matches at an average of 106, which includes 5 half-centuries.

Rovman Powell can be a game-changer for Peshawar Zalmi in the middle overs. In this tournament, he has scored 47 runs in 3 matches at a strike rate of 188.

Wahab Riaz was expensive against the Multan Sultans, but it was just an off day at the office for him. Peshawar skipper has 11 wickets to his name in this tournament.

Waqas Maqsood has got the most wickets for Karachi Kings in this league, picking up 7 wickets in 6 matches at an economy of 9.43.

Kamran Akmal’s return to form is the biggest boost for Peshawar Zalmi. He has done well in the last 2 matches, scoring 59 and 35 runs respectively. Overall, he has scored 164 runs in this tournament.

David Miller is the prominent overseas player of Peshawar Zalmi. In 3 matches, he has scored 116 runs. He will be a risky pick as your fantasy team skipper.

Najibullah-Zadran played well for his 71* runs from 42 balls in the last match against Islamabad United. Considering his previous match’s performance, he is a risky captaincy pick.

Mohammad Amir went wicketless in the last 3 matches and he is not the best of forms with the ball. Going with his current form, you can avoid him while making your fantasy teams.