Faf du Plessis has replaced Chris Gayle in the Gladiators.

Quetta Gladiators failed to make the playoffs in the previous edition of the Pakistan Super League. Their fortunes are yet to turn as Sarfaraz Ahmed and Co have lost their first two matches of the ongoing edition. Their bowlers only managed to pick four wickets in those games. Moreover, the fact that Chris Gayle has left the squad, for the time being, won’t be helping their cause by any means.

Their next game is against Wahab Riaz’s Peshawar Zalmi in the second of Friday’s doubleheader at the National Stadium in Karachi. The Zalmi started their campaign with a four-wicket defeat at the hands of Lahore Qalandars, but got their mojo back against the Multan Sultans, beating them by six wickets. On a head-to-head count, the Gladiators are leading the Zalmi by a slender margin of 8-7.

The pitch in Karachi has been an excellent one for batting. The track hasn’t offered much to the bowlers, especially in the last couple of matches or so. Targets of around even 190 don’t look safe. Bating second should be the way forward for the teams. The temperature will be around the 26 degrees Celsius-mark with the humidity in the low-50s. There will be a fair amount of dew.

Playing Combinations for PES vs QUE

Kamran Akmal is the leading run-scorer in the history of the PSL. Therefore, the fact that the Zalmi expect him to fire doesn’t spring a surprise. In the first game, he could only manage five runs before getting out, but last time around he scored 37 runs and that should keep him in a positive frame of mind.

Mohammad Hasnain has arguably been the standout bowler for the Gladiators in the tournament. In the 7.2 overs he has bowled, he has conceded 49 runs at an economy rate of 6.68. Moreover, he has picked two wickets. A lot would depend on him if the Gladiators have to win their first match this season.

PES vs QUE Head to Head 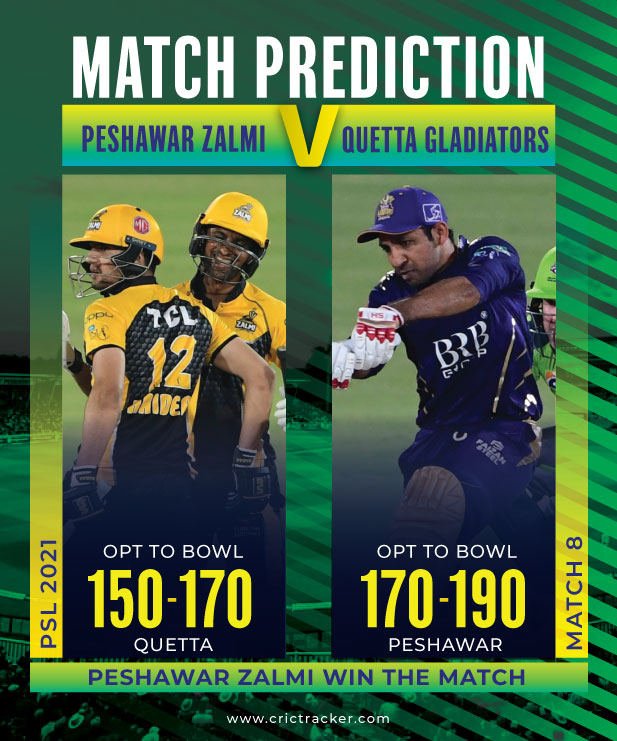