The much awaited NFTs of CPL's swashbuckling overseas players will be dropped on Rario on July 15. 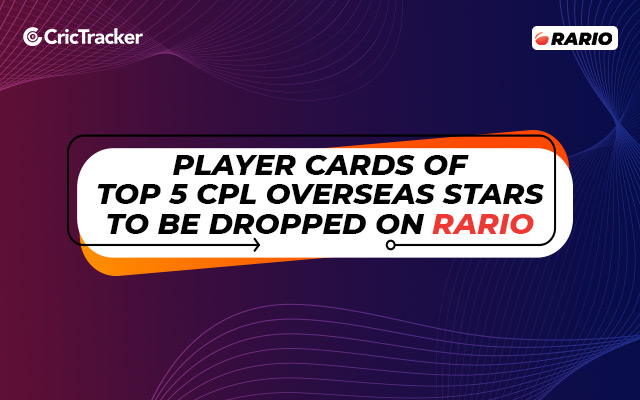 Non-Fungible Tokens (NFTs) are digital data units that are stored on a blockchain ledger and act as authentication certificates for items, demonstrating their uniqueness and granting sole ownership to the holder. NFTs have joined the cricket scene and are dominating the digital industry.

Cricket enthusiasts can purchase various packs from Rario that are collections of various interesting moments of the game. The newest edition to the family is a pack from the Caribbean Premier League 2022  that will include specific events and player cards like a game-winning six, a good catch, or a standout bowling delivery.

Fans are notified via mail and social media platforms when the aforementioned packs become online on Rario on predetermined dates called ‘Drops’. Before the specific pack is available, interested parties are permitted to reserve their seat and join the waiting list. When the pack becomes live, the fans who reserved spots have first access to any purchasing opportunities.

The much-awaited pack of the Caribbean Premier League T20 is set to be dropped by Rario. The CPL is loved by one and all, and so the upcoming pack drop is going to be no less than a mega event. When the packs for CPL 2021 were dropped, the marketplace kept buzzing every second as the buyers wanted to get their hands on them.

This time as well, it is expected to be sold out in blink of an eye. Though the CPL begins on August 31, and Rario will provide exclusive deals for the buyers when the player card drops early on July 15. While there are a lot of Caribbean players who have made their name in the cricketing world, there will be many foreign players who will be participating in the tournament.

Let us have a look at the top five overseas players who will be a part of the card drops:

The former South African skipper and one of the finest of the country will be a part of the CPL this time as well. Just like his unique batting techniques and his blistering fielding approaches, his presence on Rario will be as enthralling. One of the finest players of the St. Lucia Kings, du Plessis’ card drop would be one to watch out for.

Another South African, Imran Tahir is a part of the Guyana Amazon Warriors squad. He was the top wicket-taker in the 2020 season and is one of the bowlers who can give nightmares to the batters on the crease. His card drop would be as unique as his wicket celebration style.

The Irish batter has been in good touch with the bat, and he put up a great show on display against India recently. This season will be Stirling’s maiden outing at the CPL and the bowlers will be up for a ride when they face him on the crease. Stirling will be one of the overseas players whose card drop will be eagerly awaited.

Another former South African captain, Quinton de Kock is set to make his CPL debut this season as he will represent the Barbados Royals. One of the greats of the T20 format, de Kock is a known power-hitter as he holds the ability to smash every bowler for big runs. As he enters the CPL for the first time, his card drop will hold special moments.

The Proteas powerhouse, David Miller has been a part of the CPL for quite some time now. Previously with the Jamaica Tallawahs and the St Lucia Zouks (now St. Lucia Kings), Miller will join de Kock at the Barbados Royals this season. He is a proven match-winner, and that is what will be exciting about his card drop.

Go grab the NFT of your favourite cricket player on Rario