The 21st Match of the Plunket Shield 2020-21 will be played between Auckland Aces and Canterbury at Eden Park Outer Oval in Auckland starting from 27th March.

Auckland Aces will take on Canterbury in the 21st match of the Plunket Shield 2020-21 starting from Saturday. Auckland Aces will be fighting for the 2nd spot in the standings with one more round still left for them after this match. With 2 wins and 3 drawn matches, Auckland are currently placed 3rd in the standings with 50 points. Their top performers Glenn Phillips and Kyle Jamieson will be unavailable, and hence their youngsters will have to produce something magical.

On the other hand, Canterbury have already emerged as champions of the Plunket Shield 2020-21 with two rounds left in this competition. They have a lead of 47 points over Northern Districts, who are placed second with 51 points. Canterbury have had a fabulous season this year, winning 5 of their 6 matches. In their previous match, they won convincingly by 9 wickets against Central Districts to register their 5th victory of the season.

It will be partly cloudy for the first 2 days here in Auckland with a maximum temperature of 22 degrees Celsius, and there are 80 per cent chances of precipitation for the last 2 days of a match.

Batting is not going to be an easy task on this surface in the 1st innings of the match. We have witnessed low scores in the last 2 matches played here, but the surface will become better and better to bat on as the game progresses. Whoever wins the toss should bowl first on this track.

Here's how India can still qualify for WTC 2021-23 finals

Rishabh Pant's improvement as wicketkeeper has been remarkable, like MS Dhoni: Sanjay Manjrekar

Auckland skipper Robert O’Donnell bought up his first century of the tournament in the previous match against Otago, scoring 128 runs. Overall in this tournament, he has scored 203 runs in 7 innings at an average of 33.83.

Wicketkeeper Ben Horne is the second-highest run-scorer for Auckland in this tournament, scoring 296 runs in 7 innings at an average of 49.33 which comprised of one century and a half-century.

International capped player William Somerville has scalped 7 wickets so far in this competition with the best bowling figure of 2/52. With the bat, he has scored 82 runs at an average of 16.4.

Sean Solia is the 2nd on the list of most wicket-takers for Auckland in this tournament, picking up 12 wickets in 5 innings with the bowling figure of 5/8. With the bat, he has scored 75 runs.

Leo Carter has scored the most runs for Canterbury in this tournament. He has accumulated 403 runs in 7 innings at an average of 67.16, which includes one century and two half-centuries.

Cam Fletcher played a useful knock in the previous match against Central Districts, scoring 78 runs in 1st innings. Overall, he has scored 387 runs in 7 innings at an average of 96.75, with the highest score of 157.

Will Williams is the joint leading wicket-taker in this tournament. he has picked up 25 wickets in 12 innings with the bowling figure of 5/26.

Fraser Sheat too has picked up 25 wickets in this competition with the bowling figure of 5/25. He also has contributed with the bat by scoring 51 runs in 3 innings with the highest score of 36.

Also Read – IPL 2021: Team-wise one uncapped player who might get a chance in the XI 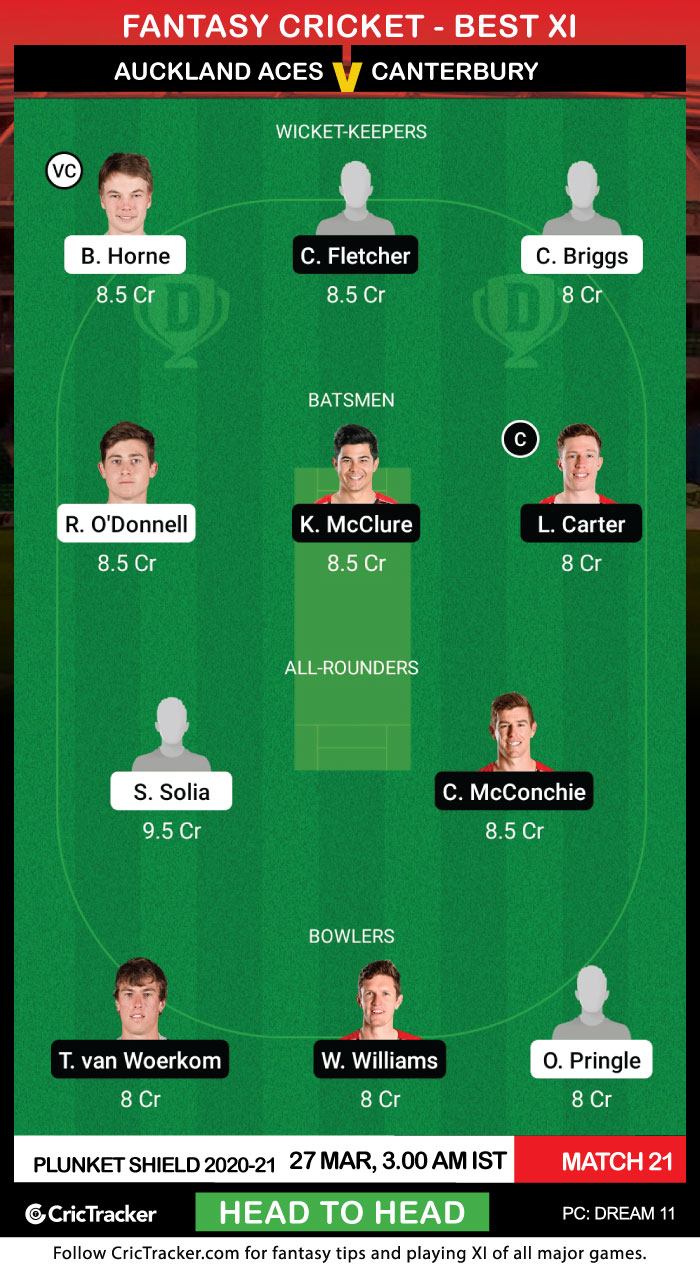 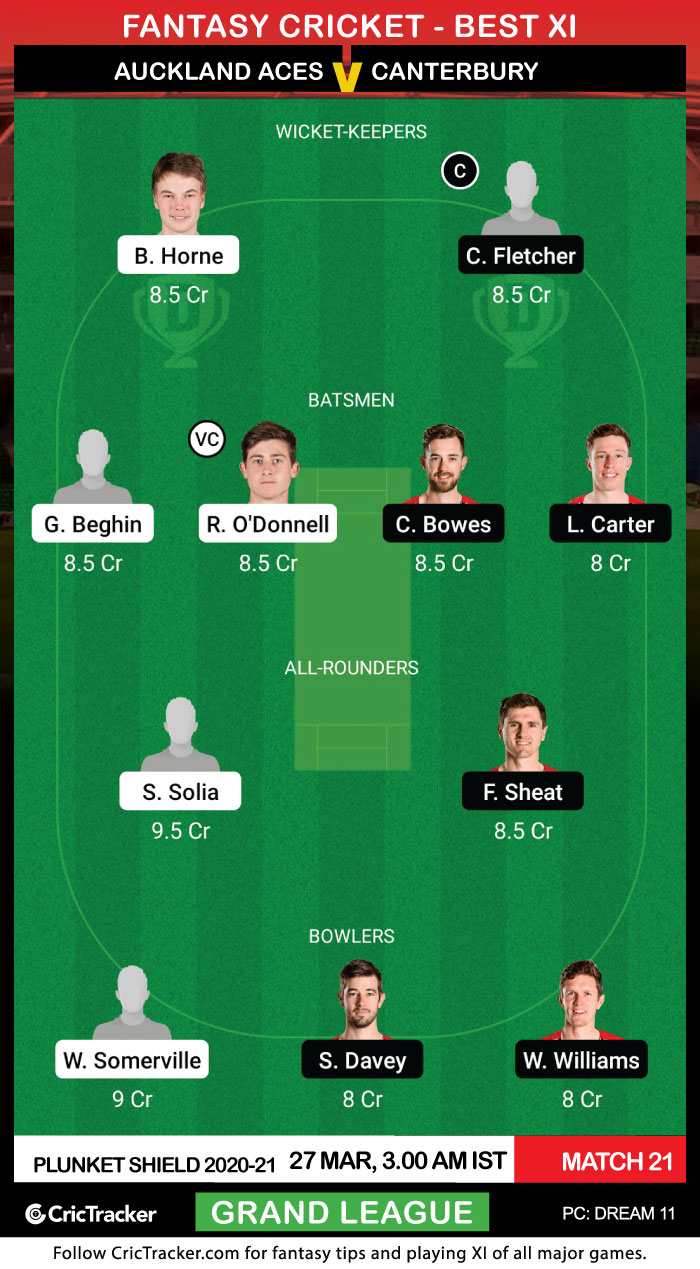 Wicketkeepers Ben Horne and Cam Fletcher will bring a lot of stability in the middle order and they are scoring runs consistently for their respective sides. Consider picking them both in your Dream11 fantasy teams.