The Sultans will be playing their first-ever PSL game and it will be a huge moment for them.

The much-hyped about, highly anticipated and lucrative Pakistan Super League is into its third year of existence. After finishing at the bottom of the table in the last two seasons, Lahore Qalandars aim for rejuvenation against the newbies Multan Sultans. The Qalandars managed to win just five games in both seasons collectively, a stat which they’d want to better this season.

The PSL kick-started in 2016 with five teams and they’ve added one more team this time. The Sultans will be playing their first-ever PSL game and it will be a huge moment for them. A veteran in the game and one of Pakistan’s all-time greats Shoaib Malik will be leading the newest bunch in the League and a clinching a title in their first outing would be some beginning.

The Qalandars have some big names on their side like the legendary Brendon McCullum. Their spin department looks devastating with the likes of Yasir Shah and Sunil Narine collaborating. Under-19 sensation Shaheen Shah Afridi will be hogging a lot of limelight as well. Going by the names, Lahore should certainly turn the tables around as they might not get a better team than this to do it.

The boundaries in Dubai demand a decent strike to go over the fence and the batsmen will feel the challenge. The track will be 40-oversold by the time this game begins and might provide a decent turn for the spinners. Both teams have three world-class spinners in Yasir Shah, Sunil Narine, and Imran Tahir, who will be in the spotlight for sure.

Senior Pakistani batsman Ahmed Shehzad will open the innings alongside the Windies batsman Nicolas Pooran. Kumar Sangakkara is highly likely to take the number 3 spot, with the likes of Shoaib Malik, Sohaib Maqsood, and Sohail Tanvir comprising the middle order. The onus will remain on skipper Malik to lead from the front.

They might be going in with just one specialist spinner in Imran Tahir as they have the all-round services of Shoaib Malik. Their fast bowling quartet will be an all-Pakistani attack with the likes of Mohammad Irfan, Sohail Tanvir, Junaid Khan and Mohammad Abbas.

It’ll be very interesting to see if the Lahore Qalandars allow Sunil Narine to open the innings alongside Fakhar Zaman. Both these players had tremendous success with the bat across all the T20 leagues in recent times. Brendon McCullum‘s presence in itself is a huge blessing for the side. Cameron Delport, Umar Akmal, and Aamer Yamin also will have a big role to play with the bat.

Sunil Narine and Yasir Shah will be pairing up to form one of the most devastating spin-pairs in the world right now. They also have the death-overs specialist Mustafizur Rahman, who will also excel on the slow pitches with his cutters. They have some decent fast bowlers in Shaheen Afridi and Bilawal Bhatti, who add more strength to the lineup.

Here is what CricTracker predicts for the game 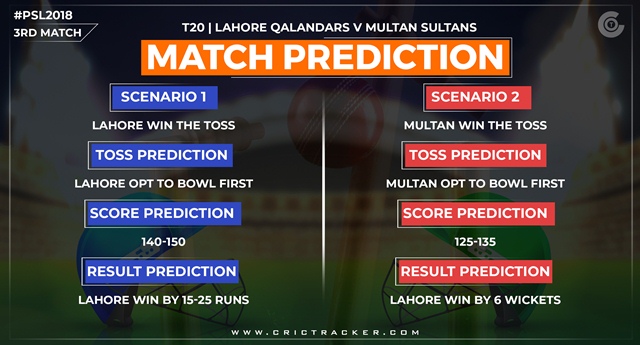 The prediction is for the Lahore Qalandars to clinch a low-scoring thriller.