Even before the tournament could begin, the Sultans were dealt with body-blows. First, Steve Smith was ruled out with an injury he sustained during the BPL and then, to make matters worse for them, Joe Denly picked country over club.

On the other hand, the Kings from Karachi will be buzzing with confidence with biggies in the form of Imad Wasim and Babar Azam leading their ranks.

Note that Colin Munro and Ben Dunk are unavailable for this fixture and Liam Livingstone could, therefore, play a major role.

The Sultans have a power-packed outfit. The big local names here are Shoaib Malik, Junaid Khan and the ever-youthful Shahid Afridi.

Laurie Evans and Babar Azam: these two will make for solid batting picks in your Fantain Fantasy XI. Despite a forgettable tour of South Africa, Azam repeatedly displayed the flair that makes him the best in the business in these parts

Andre Russell and Imad Wasim: this proven pair of all-rounders is a ‘must-have’. They’re experienced, reliable and needless to say, can do wonders with both bat and ball

Mohammad Amir and Junaid Khan: these two are quick and can dent the opposition line up in no time. 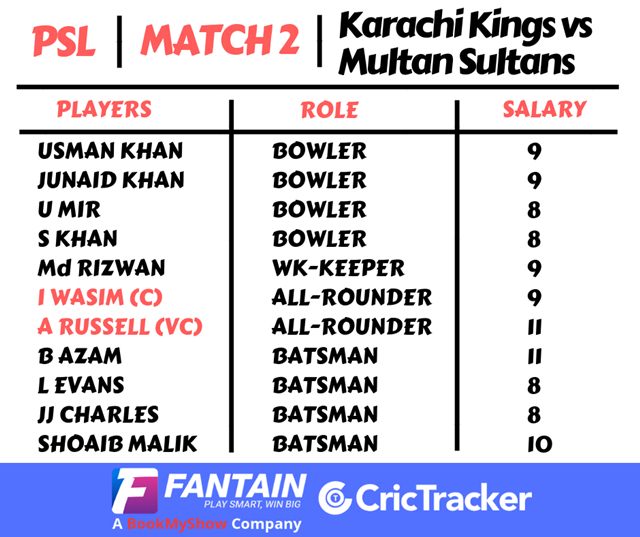 Peshawar looked set to win the PSL last year but squandered the opportunity in the final. Darren Sammy is back leading Peshawar this year and the team is loaded with all-rounders.

In addition to Darren Sammy, Peshawar will rely on the experienced Wahab Riaz and the effervescent Hasan Ali. Note that Misbah-ul-Haq will wear the Peshawar jersey this year and his presence will lend solidity to the side’s batting unit.

Sarfraz Ahmed will lead the Quetta outfit and this side is packed with world class T20 players. They’ve got Sunil Narine and Shane Watson in the all-rounder mold and a terrific T20 batsman in the form of Rilee Russouw.

Note that Sunil Narine is nursing an injury and will not play this fixture.

Sarfaraz Ahmed: the skipper is bound to play an integral role and with the gloves on, he’s your best bet for wicket-keeper batsman

Rilee Rossouw: the South African was the highest run scorer in the BPL and Quetta would love to cash in on his form

Shane Watson: the veteran had a reasonably good BPL and will look to get going from the word go here

Hasan Ali: the Pakistani pacer knows these parts really well and you ought to pick him for the amazing things that he’s capable of with his sheer energy on the turf. 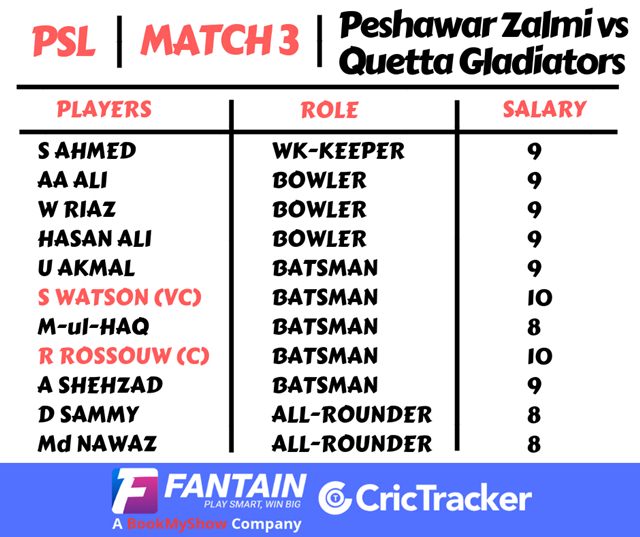