The Gladiators won three outs of their last four games against the Zalmi in Dubai.

The Peshawar Zalmi, captained by Darren Sammy, have done reasonably well across all the three edition’s of the Pakistan Super League (PSL). However, they are yet to get their hands on the coveted trophy. Last season, they crawled into the playoffs and even moved the final against Islamabad United. However, they couldn’t finish their journey on a convincing note and lost that game by three wickets.

The Quetta Gladiators, on the contrary, went to the playoffs last season but lost to the Zalmi by one run in the first Eliminator. The team will be captained by Sarfaraz Ahmed and would be playing their first match in this PSL against the Zalmi at the Dubai International Cricket Stadium. The players would also be wearing Golden Ribbons tomorrow on the occasion of International Child Hood Cancer Awareness Day.

The pitch in Dubai gets better at night and chasing teams have had the advantage over the last few encounters. Bowlers will have their task cut out. Teams are most likely to field first after winning the toss.

Kamran Akmal and Imam-ul-Haq are most likely to open the batting. The onus would be on Sohaib Maqsood and Kieron Pollard in the middle-order. It would be interesting to see Misbah-ul-Haq’s batting position. Liam Dawson’s role as the all-rounder would also be crucial. Wahab Riaz and Hasan Ali will lead the fast bowling department. They may play one of Jordan and Salamkheil depending on the conditions.

Shane Watson and Ahmed Shehzad are most likely to open the batting. Rilee Rossouw is slotted at number three. Mohammad Nawaz and Sarfaraz are no mugs with the bat either. Anwar Ali and Sohail Tanvir can hit the big shots too. Mohammad Asghar, Fawad Ahmed and Max Waller, Sunil Narine’s replacement, are the spin-bowling options. Mohammad Irfan is the other bowler.

The prediction is that the Quetta Gladiators will win. 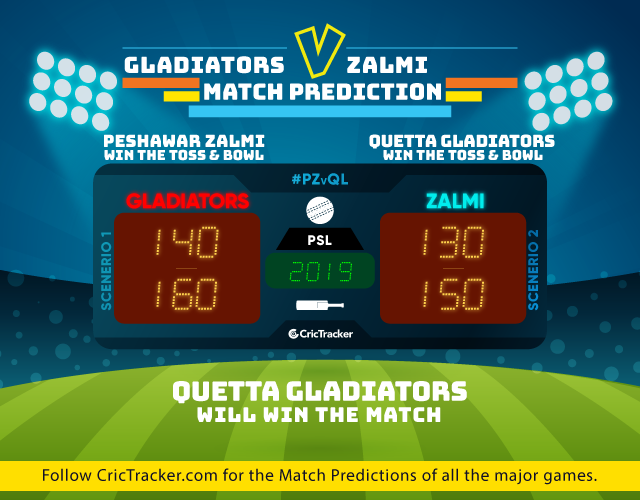