Defending champions face a stern test on a steamy Saturday afternoon in Dubai.

Defending champions Islamabad United will take the field against the exuberant Multan Sultans on a hot steamy Saturday evening in Dubai. While both sides have brilliant names on paper, we have seen multiple teams the past crashing out early despite having the best of star players. Current form will be a key factor as the tournament goes on both sides will be keen to collect a bit of that.

Banking on Faheem Ashraf’s brilliant spell, Islamabad came out on top against Lahore Qalandars in the tournament. They picked up from where they left last season and Asif Ali, who saved Islamabad from a potential scare in the final last season, once again did the same job providing a brilliant finishing touch.

This game promises to be a cracker of a contest and a good crowd turn up is expected considering it’s a Saturday afternoon encounter to go with some legendary names in action like Shoaib Malik, Shahid Afridi and Andre Russell.

Dubai doesn’t often provide batting friendly tracks but afternoon games could always turn out to be high scoring. The weather is going to be a little cloudy and could be a lot more pleasant for the crowd to witness T20 action. Everything fits properly in place as it stands for a cracking contest.

As exuberant as Islamabad are, they also possess great depth. Rizwan Hussain and Luke Ronchi will be opening the innings with Cameron Delport, Hussain Talat and Philip Salt coming in the middle order. Asif Ali, Samit Patel, Faheem Ashraf and Shadab Khan add more depth to their batting.

Faheem Ashraf’s spell proved to be pivotal on a batting friendly wicket and he will be eager to repeat such performances. Shadab Khan and Samit Patel will be the spinning options while skipper Mohammad Sami and Waqas Maqsood will be the other bowlers in the lineup.

Shan Masood and Tom Moores will open for the Sultans with English cricketer Laurie Evans coming in at number 3. Shoaib Malik, Andre Russell, Shahid Afridi and Hammad Azam form a fabulous middle order with the likes of Chris Green coming towards the end.

The experience of Junaid Khan and Mohammad Irfan makes their bowling attack looks pretty solid. To add to that, they have all-rounders like Shahid Afridi and Andre Russell, who can win games single-handedly for the side. Chris Green and Mohammad Ilyas are the options for skipper Malik.

The prediction is for Multan Sultans to emerge victorious. 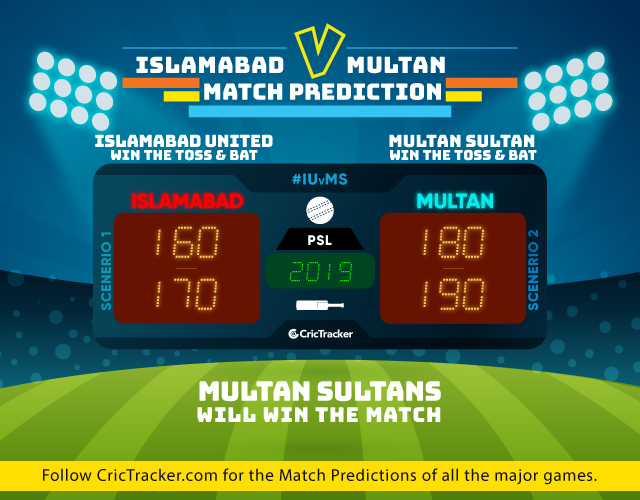