Sikandar Raza has been added to the Peshawar Zalmi squad.

The 1st semi-final of the Pakistan Super League (PSL) 2020 between Multan Sultans and Peshawar Zalmi at the Gaddafi Stadium in Lahore.

Due to the outbreak of the Coronavirus COVID-19, the Pakistan Cricket Board (PCB) was forced to do away with the playoffs concept and reduce the playing days. And, so on Tuesday, we will see both the semi-finals take place; the first of which will be played between table-toppers Multan Sultans and former champions Peshawar Zalmi.

Multan Sultans have been pretty brilliant throughout the tournament and will be looking to carry their form into the knockout stage of the competition. They, however, come into this game on the back of a nine-wicket defeat at the hands of Lahore Qalandars after they failed to defend their total of 187 thanks to a whirlwind hundred from Chris Lynn- 113 off 55 balls.

Peshawar Zalmi, on the other hand, will be looking the shrug off the ignominy of suffering back-to-back defeats at the hands of Multan Sultans in the group-stage. But, it wouldn’t be an easy task, considering that they are one of the worst-hit teams due to the exodus of foreign players and the onus of leading the pack will be on the likes of Shoaib Malik, Imam Ul-Haq, Kamran Akmal and Haider Ali.

Bright spells of sunshine followed by overcast conditions is set to be the order of the day in Lahore on Tuesday. According to the report, the temperature is set to fluctuate between 13-26 degrees Celsius while the humidity is set to hover around 40%. Chances of rain- 10℅

Another placid track is expected at the Gaddafi Stadium in Lahore for the semi-finals. The past three games have seen a similar script being played out: teams overhauling whatever target that is set by the opponent. The targets of close to 190 have been chased down on three consecutive occasions with absolute disdain, and come to the semi-finals, both sides will be looking to put the opposition in and chase later.

Sikandar Raza has been added to the Peshawar Zalmi squad.

Multan Sultans: Zeeshan Ashraf scored a half-century, the last time these sides locked horns while the trio of Shan Masood [42], Ravi Bopara [33] and Khushdil Shah [70* off 29 balls] were the spearheads behind Multan posting 6-187 against Qalandars. They will once again lead the batting-unit.

Sohail Tanvir [3-26] and Ali Shafiq [2-31] were instrumental in Multan defending their total against Peshawar Zalmi in their previous meeting. They will once again be the key to their fortunes. Imran Tahir will lead the spin-bowling department.

Peshawar Zalmi: In the absence of the overseas firepower, the onus of leading the batting-unit will be on the likes of Kamran Akmal, Imam-ul-Haq, Shoaib Malik and Haider Ali. As far as bowling is concerned, Rahat Ali claimed 3-24 in his last outing against Multan Sultans. He, along with skipper Wahab Riaz will be the key. 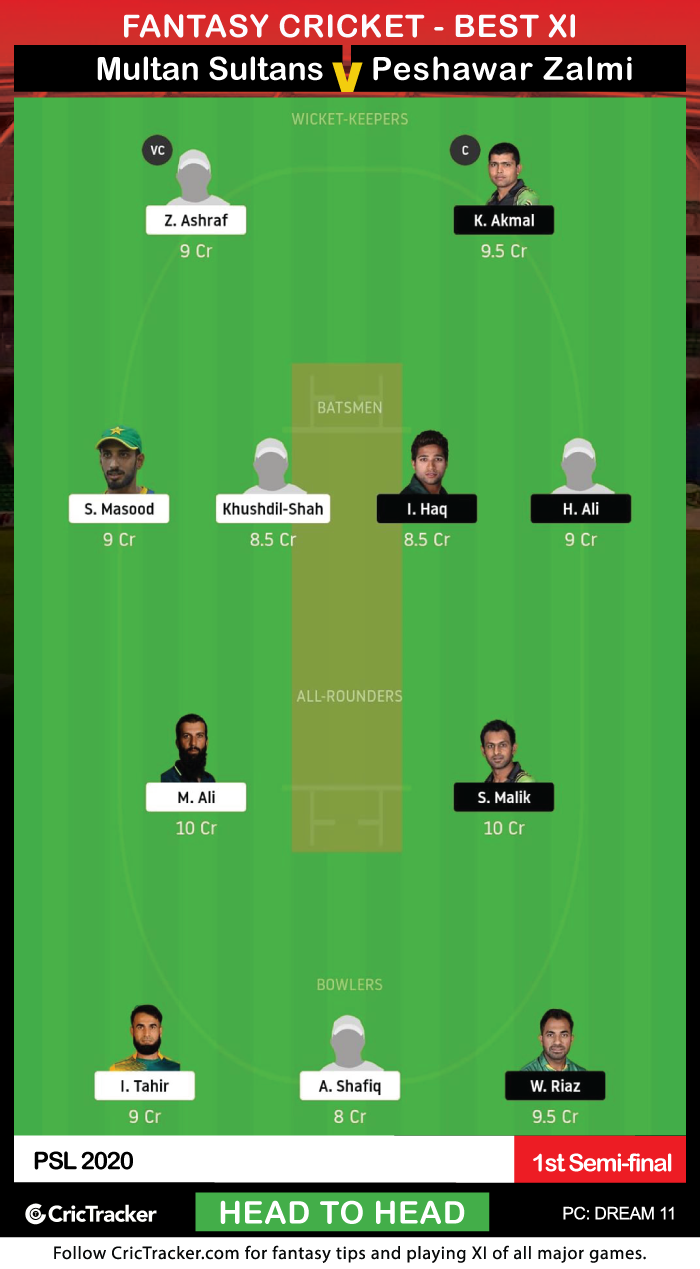 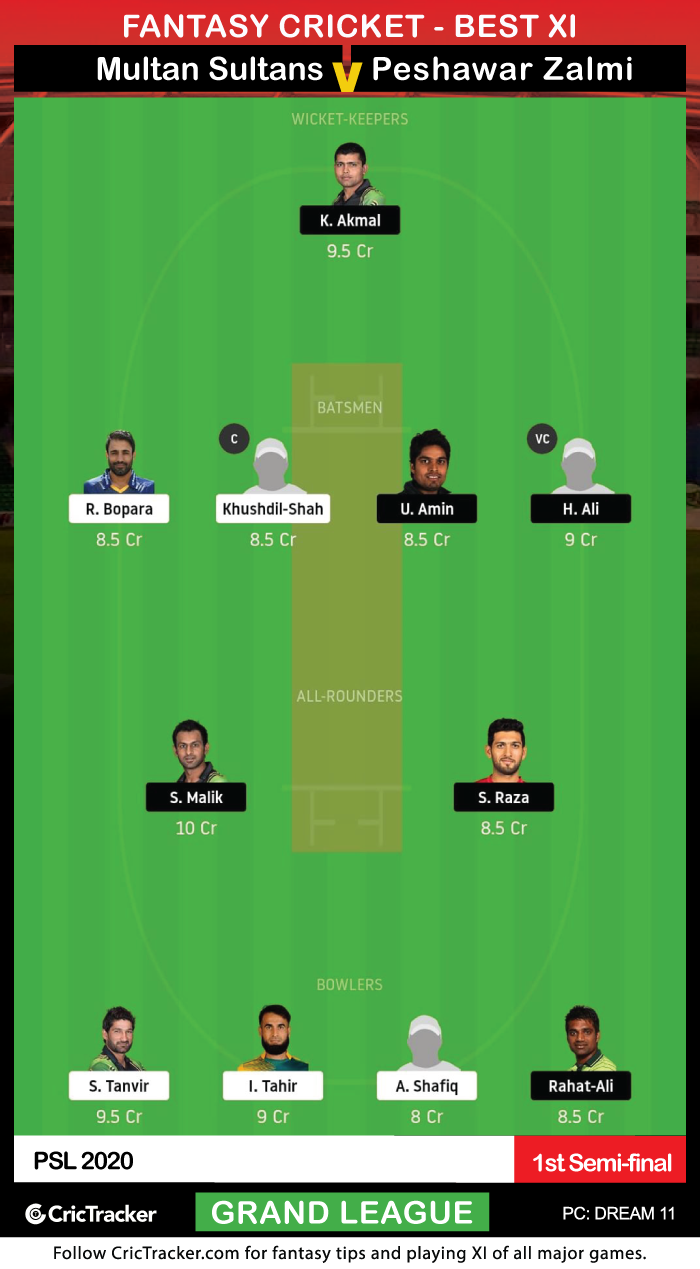 The likes of Khushdil Shah and Haider Ali have left a big impact courtesy their whirlwind performances in the league-stage. Hence, picking them as captain/vice-captain of your grand league team could be worth a punt.

Multan Sultans is expected to come out as winners.