Will the Sultans be able to make it to the final or Zalmi will upset their run?

The Pakistan Super League (PSL) has reached its climax. Amid Coronavirus outbreak, the PCB decided to scrap the playoffs for this season which has led to the Multan Sultans, despite topping the league stage, playing the knockout game now. They will face the fourth-placed Peshawar Zalmi who trumped Quetta Gladiators to scrape into the top four.

However, the team has the experience to bring the best out of themselves in the crunch matches having qualified into the knockouts before. Multan Sultans, on the other hand, played top quality cricket winning six out of the 10 matches they played while only losing a couple of matches. The overseas players leaving the PSL midway due to Coronavirus fears has affected the tournament as well and Zalmi have been hit the most with it.

However, the franchise has signed Sikandar Raza and the Zimbabwe star looks set to feature in the crucial semi-final for Zalmi. The Sultans, however, are fortunate that the likes of Moeen Ali and Ravi Bopara have stayed back and back them to win the game for them.

The weather is Lahore is expected to be clear on Tuesday. There is no chance of rain either with the temperature hovering around 27-28 Degrees Celsius according to AccuWeather. The pitch in Lahore has been a batting beauty this season. The scores around 190 have been chased down and the trend should continue in this game as well. The team winning the toss is expected to bowl.

The Multan Sultans have no reason to change their line-up from the previous game. Their skipper Shan Masood has led the team well and is in the form with the bat as well. The likes of Zeeshan Ashraf and Khushdil Shah have hit form at the right time as well which should come as a relief for the franchise. Moeen Ali and Ravi Bopara are holding this unit together with their all-round skills.

With the ball, Junaid Khan needs to step up at any cost. He will have Usman Qadir, Bilawal Bhatti, Shahid Afridi and Ali Shafiq to accompany him. However, Junaid’s experience is huge compared to others and left-arm seamer should lead the attack from the front.

The Zalmi are likely to make a couple of changes to their line-up of the previous match. They have signed Sikandar Raza and will definitely not bench him after the all-rounder has travelled all the way from Zimbabwe to make himself available. Yasir Shah is also likely to return to the line-up after sitting out in the last game. Hammad Azam and Mohammad Amir Khan who didn’t impress much should pave for the duo in the playing XI.

The prediction is for the chasing team to win the match 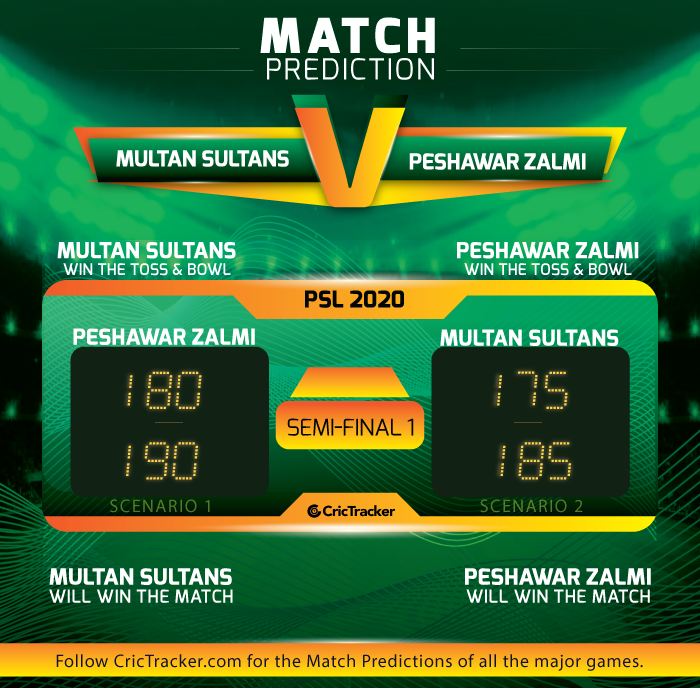