Babar Azam will be an obvious pick as he is the leading run-scorer for Karachi Kings with 104 runs in two games.

The 10th match of the Pakistan Super League 2020 will be played between Multan Sultans and Karachi Kings at the Multan Cricket Stadium in Multan.

Multan Sultans are leading the points table with four points in the league table. Now, their main aim will be to consolidate their position by registering a clinical victory against Karachi Kings. Their batting line up looks quite formidable that comprises of James Vince, Shan Masood and Rilee Rossouw, who can turn the tables in their side’s favour. However, they have failed to perform as a unit in PSL 2020.

But, if they managed to click good knocks in the upcoming cash then their chances of winning the match are quite high. Meanwhile, their bowling unit has done an impressive job with the ball. In the previous game, Sohail Tanvir amazed everyone with his four-wicket haul that turned out to be the prime reason behind their victory.

Karachi Kings’ power lies in their top order that is equipped with some of the best T20 players like Babar Azam, Alex Hales, Cameron Delport and Sharjeel Khan. Kings will certainly bank on their batting line up which can dismantle any bowling lineup when they are playing in full flow. It will be interesting to watch if they can defeat the in-form side of Multan Sultans. However, their weakness lies in the bowling line up that has Mohammad Amir and Chris Jordan as their prime bowlers.

The weather forecast says that there are slight chances of rain on the matchday but it will not affect the length of the match. The wind will be blowing at a rate of 18 to 28 km/hr whereas the temperature will hover between 15 and 28 Degree Celsius throughout the day according to Accuweather.

The track at Multan Cricket Stadium is expected to go in favour of bowlers due to the overcast conditions predicted by the weather forecast department. This ground has hosted one game in this edition of PSL in which the side batting first ended up scoring only 123 runs and that was easily chased by the opponent. And, the same situation is expected in the upcoming game. Hence, the side winning the toss will look to field first to be on the safer side.

Babar Azam will be an obvious pick as he is the leading run-scorer for Karachi Kings with 104 runs in 2 games. James Vince and Rilee Rossouw will be other important picks for any fantasy team as far as their form is concerned. Sohail Tanvir took a four-wicket haul in the previous game and he will be a vital player in the bowlers’ category. 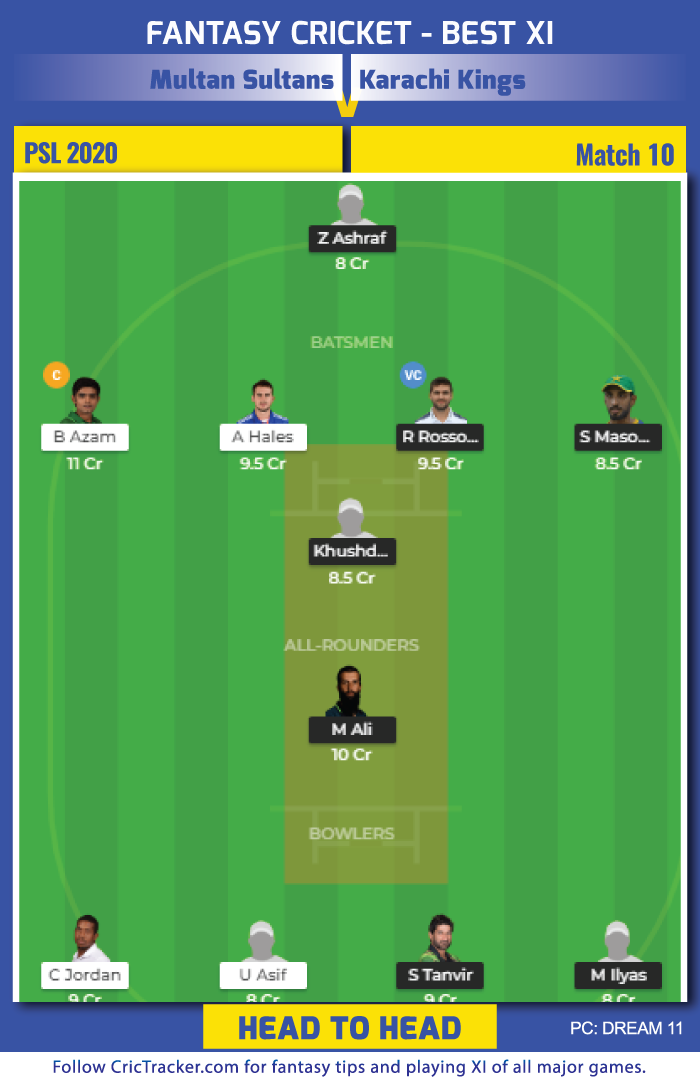 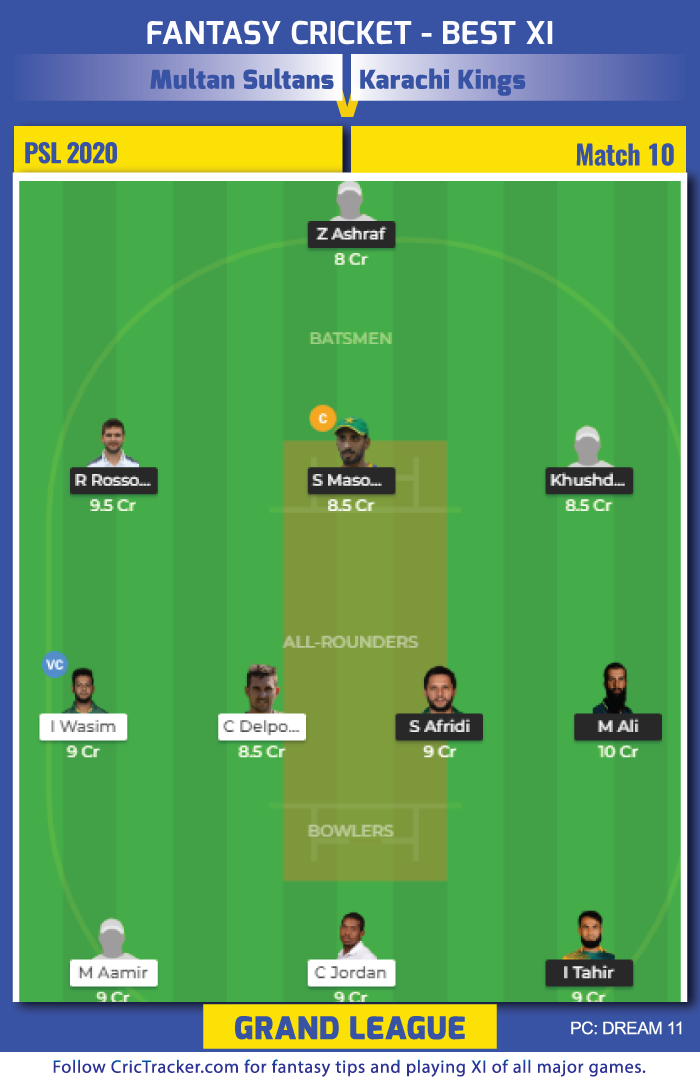 It is expected to be a low-scoring affair between Multan Sultans and Karachi Kings. Hence, the users should go with at least four bowlers in their fantasy team.

User Tips: The user can go with the combination of one wicketkeeper, five batsmen, one all-rounder and four bowlers.

Karachi Kings are expected to win the match.