In the two matches they've played so far, Qalandars have failed to dazzle in both the matches.

In their previous match against Islamabad United, Qalandars suffered a 1-wicket defeat on the penultimate delivery despite amassing a competitive score of 182 runs. On the back of Mohammad Hafeez‘s 98-run knock, Qalandars were able to post a mammoth total of 182 runs on the scoreboard.

However, their bowlers bowed down against the wrath of Shadab Khan and Colin Ingram as their quick-fire knocks proved vital in Islamabad United’s run-chase. Muhammad Musa’s 17-run cameo at the end finished things off in style for United as they registered a narrow 1-wicket victory in the last over. Despite Shaheen Afridi’s four-wicket haul, Qalandars failed to curb Islamabad United’s run-flow.

Peshawar Zalmi have also failed to put up a strong show so far in the tournament as they have gathered only one victory from their three matches of the tournament. They are currently poised second-last in the points table after amassing two points from three matches.

Despite being equipped with a strong squad, Peshawar Zalmi’s batting force is finding it difficult to fire off in crucial situations. Their bowling attack has fared well so far in the season but their batting force– comprising stalwarts like Tom Banton and Shoaib Malik– has failed to deliver consistent performances.

There are high chances of rain to intervene in the match. The temperature is expected to hover around 18 degrees Celcius according to AccuWeather with high levels of humidity. The track at Rawalpindi Cricket Stadium is expected to aid the batsmen and the side batting first will have an upper edge as far as the stats of this ground are concerned.

Lahore Qalandars has many explosive batsmen in their arsenal. However, Chris Lynn’s poor run of form might be an issue for the Sohail Akhtar-led side. Qalandars might try to shuffle their batting force and give Salman Butt a chance to prove his mettle. Mohammad Hafeez’s red-hot form will be the biggest positive for Qalandars. Their bowling force will be led by Shaheen Afridi and Haris Rauf. Afridi, who scalped a four-wicket haul in his previous match, will be hoping to replicate his performance.

Kamran Akmal will be leading Zalmi’s batting force amid the poor form of Tom Banton and Shoaib Malik. The Darren Sammy-led side will be aiming to retaliate and register a win in order to break into the upper half of the points table. Zalmi will also be relying on a formidable bowling force comprising the likes of Hasan Ali, Rahat Ali and Wahab Riaz. 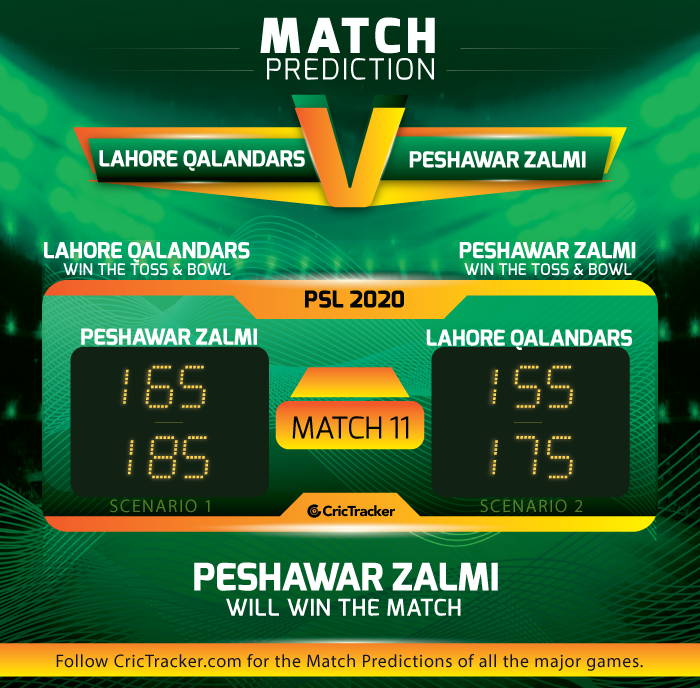