The duo of Rilee Russow and Khushdil Shah has been delivering impressive performances for Sultans this season.

It’s going to be a clash of the table-toppers as Quetta Gladiators are set to lock horns with Multan Sultans in Match 12 of the tournament.

Quetta Gladiators are currently sitting at the top of the points table after gathering three wins out of their four matches. The Sarfaraz Ahmed-led side will be hoping to consolidate their lead at the top of the table. The opening duo of Shane Watson and Jason Roy has the potential to dismantle any bowling lineup. After registering consecutive wins in PSL 2020, Gladiators will be eager to carry on their winning momentum.

Multan Sultans, on the other hand, will be aiming to clinch the top position by registering a victory in this encounter. Incorporated with youth and experience, Multan Sultans are one of the most balanced sides in the tournament. The Shan Masood-led side will be hoping to clinch their maiden PSL trophy this season by putting up consistent performances.

The track at Multan Cricket Stadium is expected to go in the favour of bowlers and batsmen are expected to have a tough time at the crease. In the previous game hosted at this venue, the team batting first amassed only 123 runs on the board. Hence, the team winning the toss will be looking to field first. It is expected to be a perfect day for a game to take place as there are no chances of rain whatsoever.

The duo of Rilee Russow and Khushdil Shah has been delivering impressive performances for Sultans this season. Moreover, Sultans have Moeen Ali and Shahid Afridi in their armoury, who can single-handedly turn the course of any match. Furthermore, Sultans are equipped with a robust bowling force comprising the likes of Sohail Tanvir, Imran Tahir and Mohammad Irfan.

The top-order batting lineup of Gladiators comprising the likes of Shane Watson, Jason Roy, Ahmed Shehzad and Sarfaraz Ahmed is the forte of Gladiators. The opening duo of Watson and Roy has a plethora of experience under its belt and both the batsmen will be aiming to propel their side to a flying start. Azam Khan also has truck two 40+ scores in his last five matches for Gladiators.

In the previous game, Roy scored a match-winning fifty for his team. Another player who has tons of experience under his belt is Ben Cutting. The all-rounder has the ability to deliver impressive performances in both the departments. The duo of Tymal Mills and Naseem Shah, who scalped two wickets each in their previous match, will be steering Gladiators’ bowling attack.

Quetta Gladiators are expected to win the match. 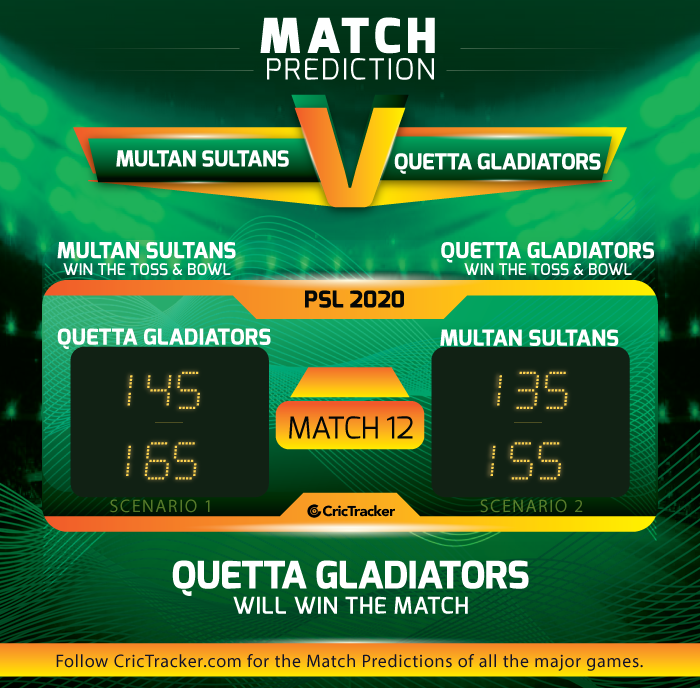