On head-to-head, both teams have won a couple of matches each.

Multan Sultans started with a resounding victory over the Lahore Qalandars at the Gaddafi Stadium. However, Shan Masood and Co were brought down to ground reality by the Islamabad United with an eight-wicket defeat. The Sultans are now set to play their first home match against the Peshawar Zalmi on Wednesday, February 26. The Zalmi, on the other hand, are pretty high on confidence.

Daren Sammy and Co tantalisingly missed out against Karachi Kings by 10 runs, but got past the Quetta Gladiators by five wickets. Kamran Akmal scored a ton to help the Zalmi register their maiden win in PSL 2020. On head-to-head count, the Zalmi are locked with the Sultans on two victories. Moreover, it will also be the first time the two sides would be facing in the PSL in Pakistan.

Multan hasn’t hosted a single T20I in the past few years. Hence, it’s hard to gauge the nature of the strip for the time being. If the track is similar to the earlier matches in this PSL, then a fairly high-scoring game seems to be in the offing. Batting second should be the way forward since it’s a night game. The temperature will be around the 24 degrees Celsius mark with no chances of rain.

For the Sultans, keeper Zeeshan Ashraf is the only half-century maker until now. Apart from him, James Vince, Shan Masood and Rilee Rossouw have gotten a few scores in the 30s and 40s. Veteran Shahid Afridi has struck the leather at 168.42 and he can be used up the order to up the scoring rate.

Speedster Mohammad Ilyas has three wickets and has the best economy rate of 7.07 among the Sultans bowlers. Imran Tahir has picked a couple of wickets, but he has been expensive than usual. The fast bowling duo of Sohail Tanvir and Mohammad Irfan haven’t had much to cheer for either.

The Zalmi batting has mostly been dominated by Kamran, who has 144 runs at a strike-rate of 177.77. His opening partner Banton, playing in his maiden PSL, has only 16 runs. Haider has shown promise, but their most experienced batter in Malik has been straining with a strike-rate of 95.83.

Mohammad Amir Khan played the U19 World Cup and he was impressive against the Gladiators. Wahab Riaz has also bowled with fire, though he has only two wickets to show for his efforts. Hasan Ali also made amends with an economical spell. Rahat and Dawson are yet to make a big impact. 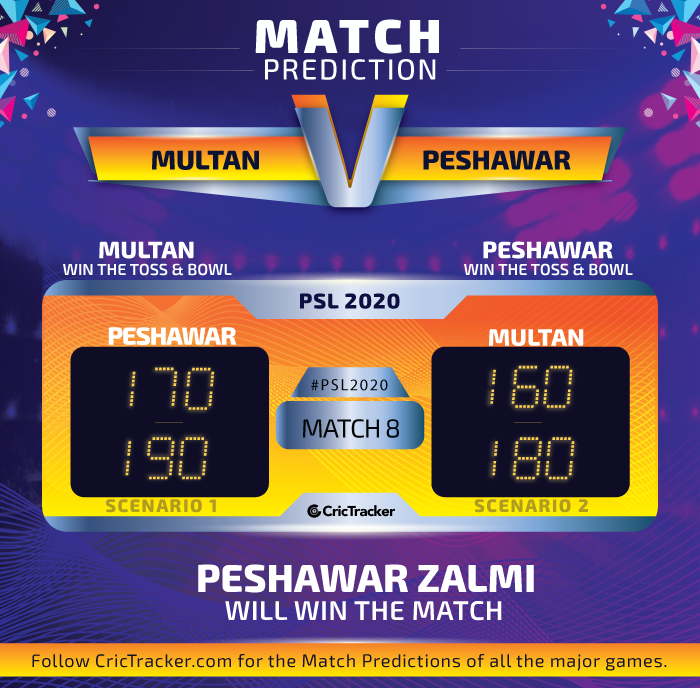