Hasan Ali has pulled out of the remaining games due to personal reasons.

Karachi Kings didn’t make the best of starts to the second leg of PSL 2021 in Abu Dhabi. After going down to the Multan Sultans, led by Mohammad Rizwan, by 12 runs, the Imad Wasim-led unit are currently placed fourth in the points table.

In fact, the Kings are yet to win two matches in succession in the ongoing tournament. Their next match is against the Shadab Khan-captained Islamabad United on Monday, June 14.

In the meantime, the United have been dealt with a blow after their leading wicket-taker this season, Hasan Ali, ruled himself out of the remaining games due to personal reasons. In their last meeting, the United beat the Kings by five wickets.

The pitch in Abu Dhabi has been a sporting one thus far. The batters have been able to play the big shots without much fuss. The bowlers, especially the spinners have gotten benefits from the surface. The pacers also had their fair share of joys. Going by the trends of the matches, chasing has been on the tougher side and batting first should be the way forward.

Playing combination for ISL vs KAR

Babar Azam has arguably been the standout batter for the Kings in the PSL 2021. He scored in the 80s last time around and showed decent form, though his team couldn’t get over the line. Overall, the youngster has notched 343 runs in the event at an average and strike rate of 114.33 and 137.75 respectively. With four fifties, the onus will again be on him to guide the Kings.

The 19-year-old Mohammad Wasim has been mightily impressive for the United. In Hasan Ali’s absence, the speedster has to lead the pace bowling unit. In six games, Wasim has picked as many wickets at an economy rate of 6.31. In the previous game against the Quetta Gladiators, the North Waziristan-born rattled Faf du Plessis’ woodwork with a length delivery. 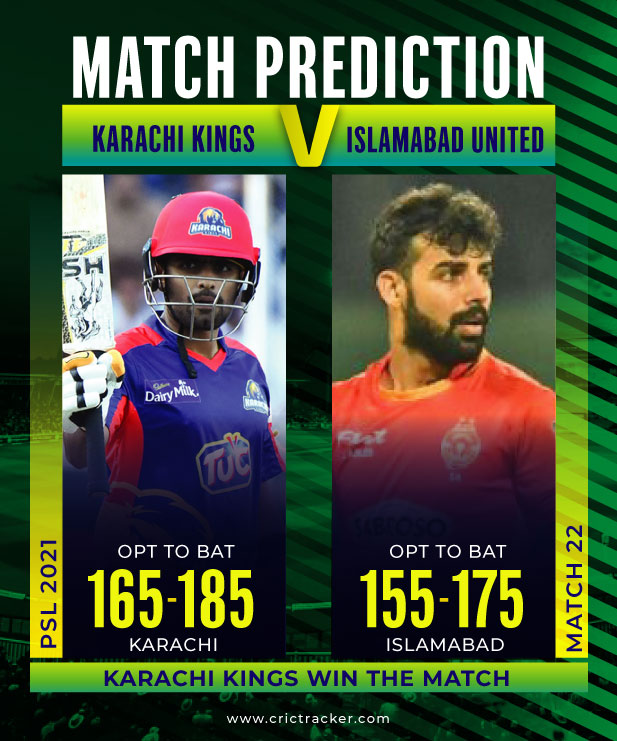