The Qalandars haven't beaten the United in the PSL since the 2016-17 edition.

The second leg of the 2021 Pakistan Super League is all set to get underway at the Sheikh Zayed Stadium in Abu Dhabi. Lahore Qalandars and Islamabad United will be locking horns on Wednesday, June 9. Both teams have had impressive runs thus far in the PSL 2021.

Having won three out of their first four games, they are well on their way of qualifying for the playoffs, though there’s a long way to go. Another win will take them to the top of the points table. Going into the next game, it’s pertinent to note that the Qalandars haven’t defeated the United since the 2016-17 edition.

Both sides also have a healthy net run rate, showing their decent run of form. But since they will be playing after a gap of three months, it remains to be seen how they adjust to the new conditions in the United Arab Emirates.

In the 2020 IPL, the average first-innings score was around the 160-mark with a team once getting out for below 100. However, in most of the matches, the scores remained high and hence, a fairly high-scoring game can be expected on Wednesday. Teams should opt to bat second as the track has helped the chasing sides.

Playing combination for LAH vs ISL

Mohammad Hafeez, without much doubt, was the standout batter for the Qalandars in the first leg of PSL 2021. Batting in the middle-order, the veteran managed 181 runs in four matches at an average and strike-rate of 90.50 and 175.72 respectively along with a top score of an unbeaten 73. Not to forget that he can bowl handy off-breaks as well.

Alex Hales has been in stupendous form in franchise domestic T20 leagues over the last few months. He has shown his class for the United as well as he is currently their leading run-scorer. In four games, Hales has notched 139 runs at an average and strike rate of 34.75 and 171.60 respectively. The right-hander is again expected to play a key role. 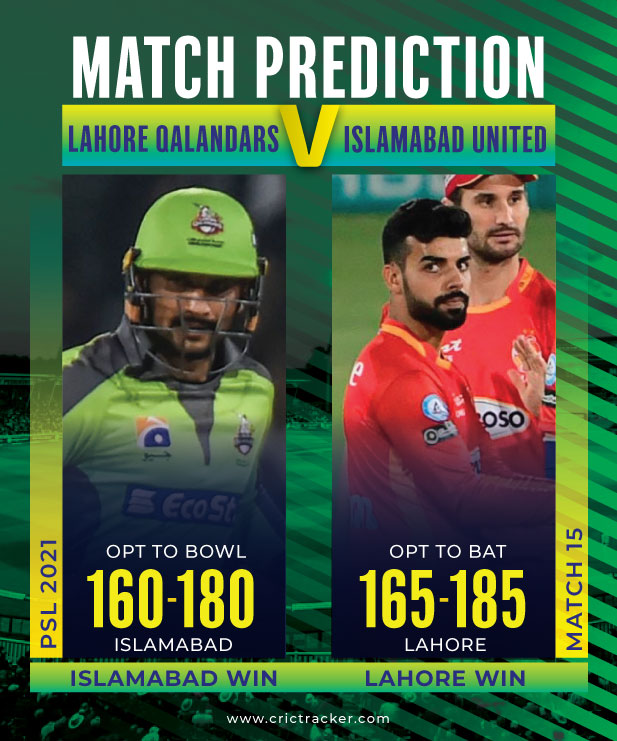