Rashid Khan, Gayle and Hafeez are good options to make captain in Fantasy for this match. 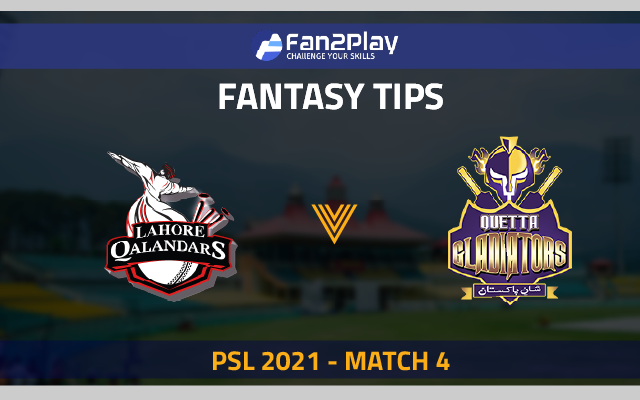 The 4th Match of the Pakistan Super League (PSL) 2021 season will be played between Lahore Qalandars and Quetta Gladiators at the National Stadium in Karachi.

This match will start at 7:30 PM IST (7 PM local time). It will be live on Sony Sports Network and can be streamed on Sony LIV.

The caravan of the sixth edition of the Pakistan Super League (PSL) rolls on as the Lahore Qalandars and Quetta Gladiators will face each other in match 4 on Monday. The Qalandars got off to a decent start as they defeated the Peshawar Zalmi in their opening game chasing down 141 with more than 1 over to spare. Mohammad Hafeez, Rashid Khan and Shaheen Afridi were the star players for them in this encounter.

The Quetta Gladiators, on the other hand, suffered a big defeat at the hands of the defending champions Karachi Kings in the season opener. Their batting crumbled to just 121 and then the bowlers couldn’t keep a lid on the run-scoring conceding runs in just 13.5 overs. The Gladiators boast of batsmen like Chris Gayle and Tom Banton alongside Sarfaraz Ahmed and Azam Khan and the team will be hoping for them to click in this game.

Mohammad Hafeez is a T20 veteran and showed his importance in the last game for the Qalandars. Coming in to bat at four, Hafeez held one end in a tricky chase and remained unbeaten on 33 off 26 balls with five fours to his name. Though Rashid Khan slammed 27 quick runs in the end when things got close, it was Hafeez’s composure right through the innings that kept the Qalandars in the game.

The Universe Boss made his presence felt in the PSL 2021 season opener itself. He smashed 39 off 24 balls but his team, Quetta Gladiators, unfortunately, lost the match. This time around, Gayle will be keen on making the start count and the Gayle storm might not be too far. Making Gayle captain of your Fantasy team is risky as well but if he clicks, the Caribbean superstar can give a lot of points. 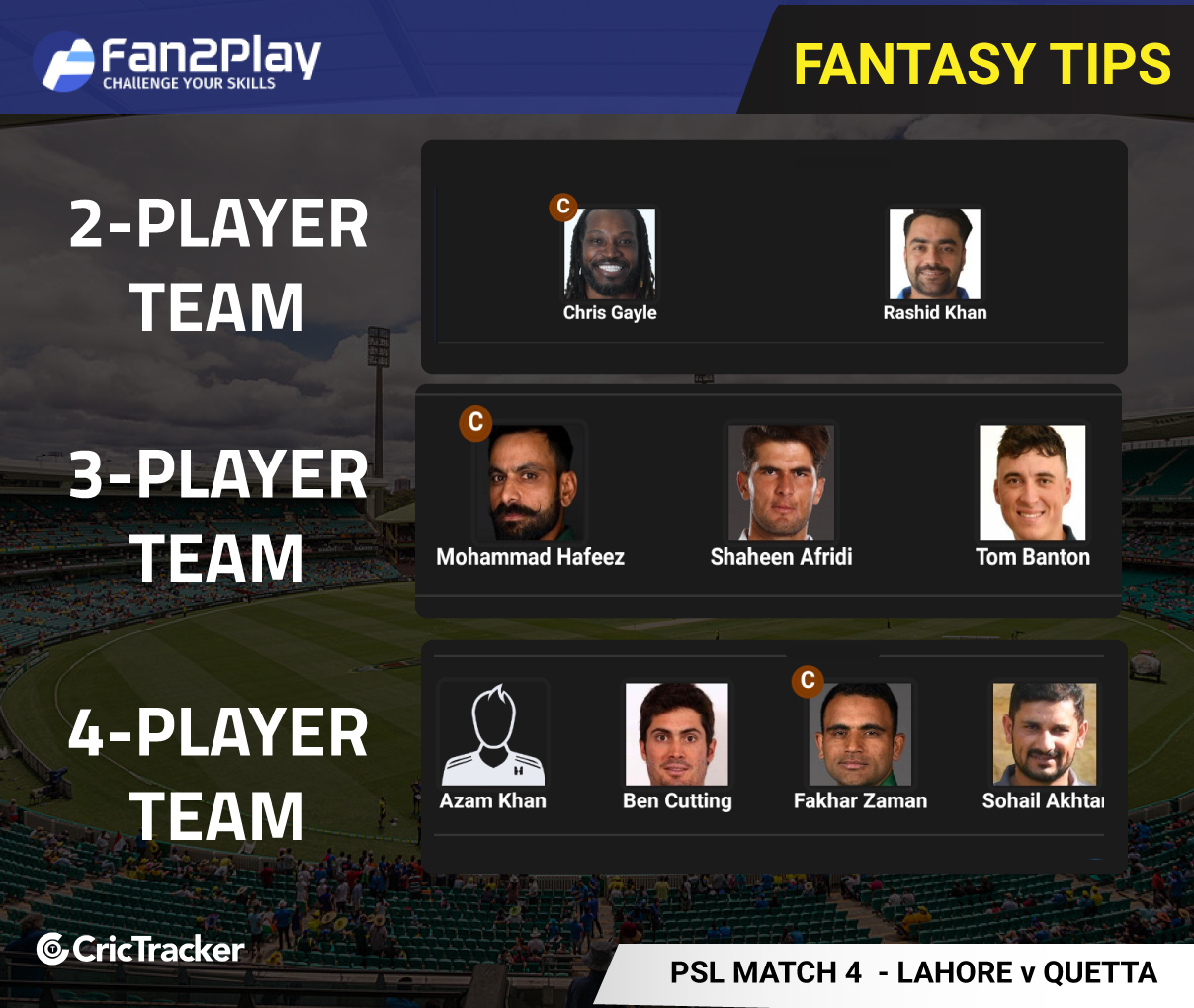 Every new user gets ₹20 as sign-up bonus and gets a 200% Welcome Bonus offer on their First Deposit of up to ₹10,000. Any amount you deposit for the first time on Fan2Play, you will get a 200% bonus on your deposit 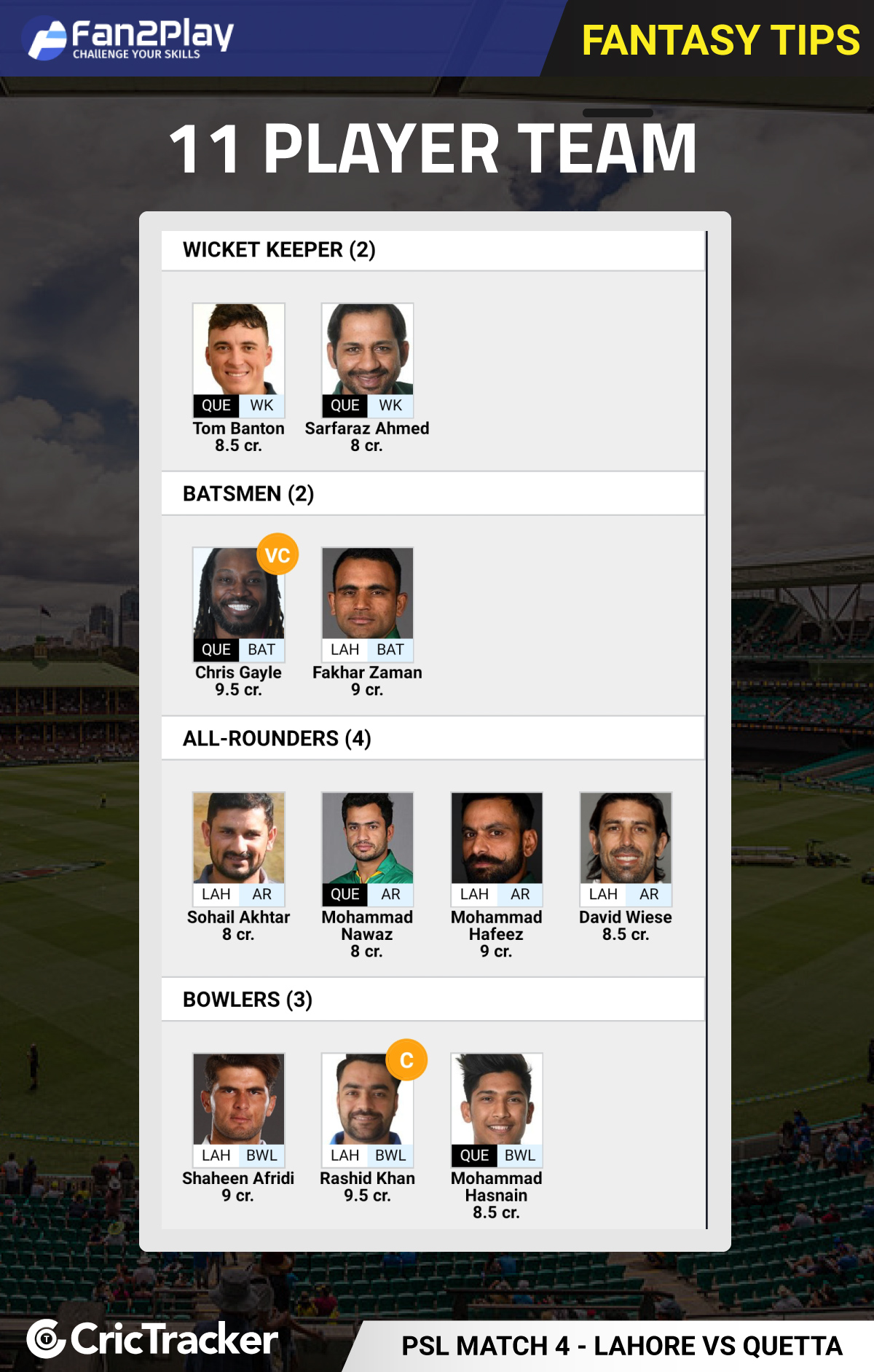