Mohammad Rizwan is the leading run-scorer of the tournament with 297 runs from five matches at an average of 59.40.

Multan Sultans and Karachi Kings are set to lock horns in the 16th match of the 2021 Pakistan Super League. The game is the first of Thursday’s doubleheader at the Sheikh Zayed Stadium in Abu Dhabi.

The Kings, captained by Imad Wasim, are sitting pretty on top with three wins from their five matches. They also have the best net run rate of 0.697 along the six participating teams.

The Sultans, on the contrary, have loads of work to do as they are languishing at the fifth position with one win from five matches. In PSL history, the Sultans have defeated the Kings only once out of six completed matches.

The pitch in Abu Dhabi was a witness to quite a few high-scoring encounters in the 2020 edition of the IPL. Scores above the 170-run mark was pretty much a norm, though once a team was bowled out under 100. The track also helped the chasing teams and hence, batting second should be the way forward. The bowlers are expected to have a tough time.

Playing combination for MUL vs KAR

Mohammad Rizwan has been exceptional for Pakistan and he has performed brilliantly for the Sultans as well. In fact, in the PSL 2021, he is the leading run-scorer with 297 runs from five games at an average and strike-rate of 59.40 and 140.09 respectively. He has been a stalwart at the top of the order, but needs support from the other as well.

Mohammad Amir has the potential to rip through the best of batting line-ups. However, in the PSL 2021 thus far, he hasn’t quite been at his very best as he has picked up four wickets from five games. However, among the bowlers, who have played all the games for the Kings, the left-armer has been the most frugal with an economy rate of 7.75. 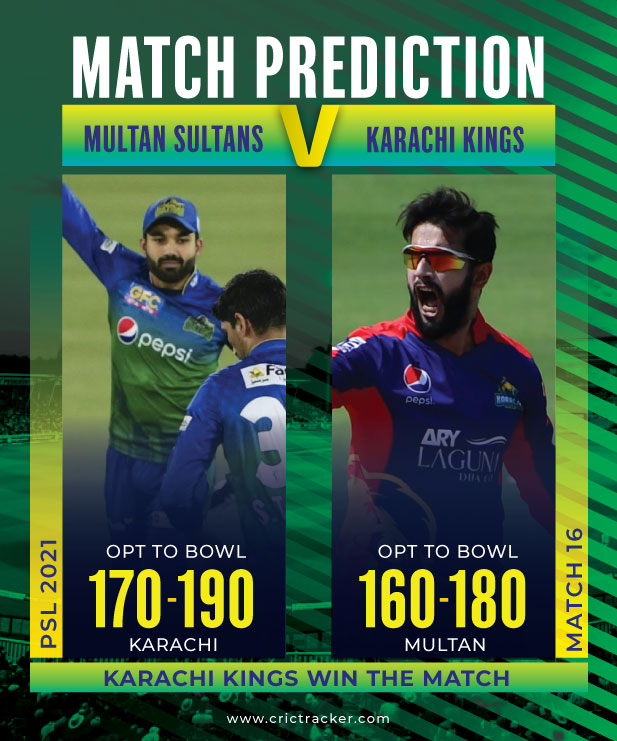