In their previous meeting at the National Stadium in Karachi, it was the Kings, who came out trumps by six wickets.

Peshawar Zalmi have had an indifferent campaign thus far in the 2021 edition of the Pakistan Super League (PSL). In eight games, the Wahab Riaz-led unit has won four and are placed third in the points table.

However, they can’t afford to be complacent with two matches left in the first round. Their next match is against the Karachi Kings in the second of Tuesday’s doubleheader in Abu Dhabi.

The Kings, led by Imad Wasim, on the other hand, have been a bit inconsistent as well. In their previous meeting at the National Stadium in Karachi, it was the Kings, who came out trumps by six wickets.

The pitch in Abu Dhabi has been a sporting one thus far. It has had everything for the pacers, spinners, and batters. But since it’s a night game, teams should opt to bat second. The matches at night time have also been pretty high-scoring. The playing conditions will be clear with the temperature around 34 degrees Celsius. The humidity will mostly be in the 50s.

Playing combination for PES vs KAR

Babar Azam has been exceptional for the Kings thus far in the tournament. He has opened the batting and has shown a great temperament. But he has been criticised of late for not being able to press the accelerator in the hour of need. He is among the leading run-scorers in the T20 event and is again expected to deliver. The Zalmi bowlers can’t afford to let him settle down.

Wahab Riaz has tried to lead from the front in the bowling department. In seven matches this season for Peshawar, he has picked up 11 wickets at an economy rate of 8.74. It goes without saying that a lot will depend on him if the Zalmi have to win their fifth game in the first round. The Kings’ batters also need to cautious while facing the veteran speedster next time. 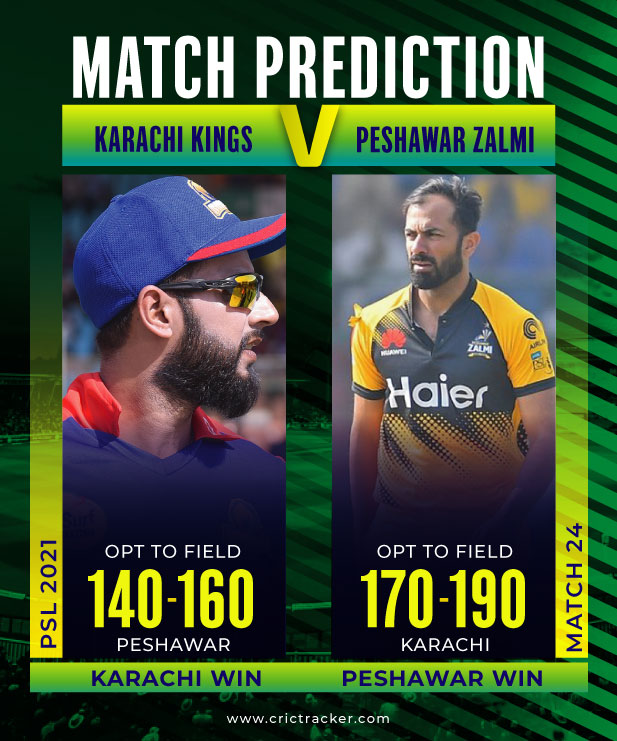